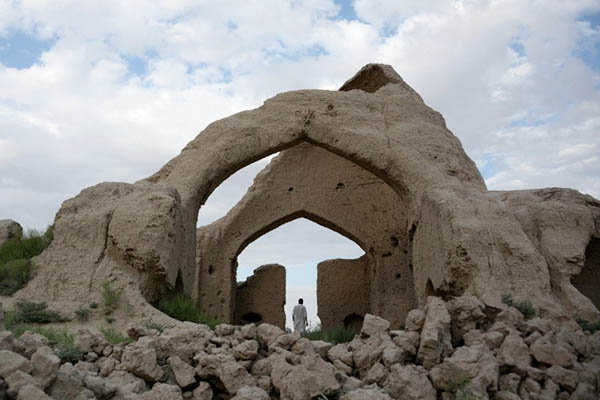 Who can lay claim to Rumi, the Sufi mystic who is one of the world’s most beloved poets? A bid by Iran and Turkey to do so has exasperated Afghanistan, country of his birth eight centuries ago.

Tehran and Ankara asked to list the work of Jalal ud-Din Muhammad Rumi as their joint heritage on the U.N.’s “Memory of the World” register in May. The register, falling under the U.N.’s cultural organization UNESCO, was formed in 1997 to protect the world’s documentary heritage—archives, correspondence and writing—especially in troubled or conflict-ridden areas.

But the Afghan government has denounced the bid, which mainly concerns the 25,600 verses of Masnavi-i-Ma’navi, one of the most influential works in Persian literature. He is one of the bestselling poets in the U.S., and his works have been translated into more than 23 languages. Hollywood is planning a Rumi biopic—also mired in controversy after rumored plans for Leonardo DiCaprio to play him were met with accusations of “whitewashing.”

The poet and philosopher “was born in Balkh in Afghanistan and made us proud,” the Ministry of Information and Culture insisted. UNESCO “never asked us” about the proposal, Harron Haklimi, the ministry’s spokesman, said, acknowledging that Kabul had been beaten to the punch but hoping they can yet convince the organization that Afghanistan has the better claim to the poet.

For Afghans, who learn his poems in primary school, Rumi is “Maulana Jalaludin Balkh,” or “Maulana”, or simply “Balkhi.”

Most researchers agree he was born in Balkh, Afghanistan in 1207—though this too has been the subject of debate: a few argue he was born just across the border, in what is modern day Tajikistan, in a region also known as Balkh.

Today, the Afghan town of Balkh is a small provincial settlement, but back then it was an ancient religious capital and center for Buddhist and Persian literature. It was sacked by Genghis Khan and his Mongol hordes in 1221.

The young Rumi and his family fled to Turkey, where he spent most of his life—he died in the city of Konya in 1273. It was there that his son founded the Order of the Whirling Dervishes to perpetuate his father’s teachings.

But for Afghans, he remains a child of their country and it is still possible to visit the house in which they believe he was born. The powerful governor of Balkh province, former warlord General Ata Mohammad Noor called on Afghanistan’s representative to the United Nations to protest.

“By limiting Maulana to only two countries, we do not do justice to a global personality who is truly cherished and admired across the world,” he said. “He is considered an important part of the culture and identity of Afghanistan,” writer and poet Sadiq Usyan, professor at the Balkh university in nearby provincial capital Mazar-i-Sharif, told AFP. Separating the two is considered an “insult” and even a “threat” to Afghanistan, he said.

A UNESCO representative in Kabul argued there had been some “confusion.”

“Any country, delegation or even individual can submit a request to be considered under this program,” said spokesman Ricardo Grassi. He noted the backlash, adding: “But this request has still to be considered.”

To accede to it without mentioning Afghanistan would be unacceptable, said the director of Balkh’s provincial cultural department, Salih Mohammad Khaleeq. “Maulana belongs to Afghanistan.”

Khaleeq has big plans for Balkh—especially since Oscar-winning star DiCaprio was tipped to play Rumi in a new Hollywood film. The unconfirmed rumor spread rapidly on social media with accusations of film industry “whitewashing,” with the hashtag #RumiWasntWhite swiftly trending. “So easy for Hollywood to find Muslims to play terrorists, but they can’t cast a Muslim as Rumi?” read one typical tweet. Another said: “remember when Idris Elba wasn’t ‘English enough’ to play James Bond, but it’s chill if Leo DiCaprio plays Rumi.”

For Khaleeq, however, the film is an opportunity. “We want this place to become a tourist site where tourists can come and visit,” he said.

A large portrait of Rumi already greets visitors arriving in Balkh. However, his childhood home has been ravaged by time, badly weathered with its ochre-colored mud walls collapsed, the interior open to the wind.

The controversy has warmed spirits in the region, with an online petition collecting nearly 6,000 signatures.

President Ashraf Ghani, who in mid-June hosted Turkey’s foreign minister Mevlut Cavusoglu, has been carefully diplomatic, with a statement saying Rumi is “a shared pride of the two countries.” It added he was ready to register Rumi’s works “as a shared heritage of Turkey and Afghanistan.”

He made no mention of Iran.

Clues to what Rumi himself might have made of the dispute may lay in his writings. In 2007, Afghanistan, Iran and Turkey came together with UNESCO to mark the 800th anniversary of his birth. Then, the cultural organization issued a medal in his honor while citing one of his famous couplets: “I do not distinguish between the relative and the stranger.”