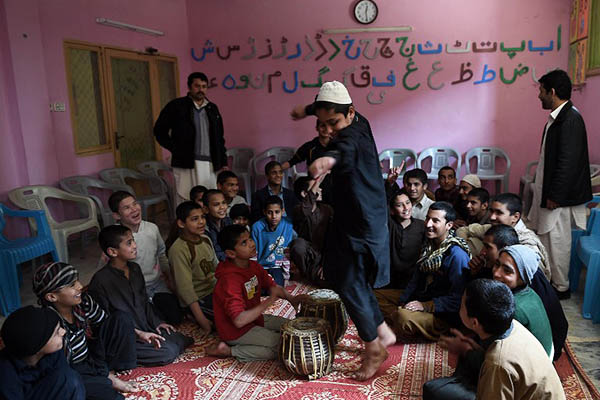 After his brother beat him with chains, Abdullah decided enough was enough and fled his home in Kabul to Pakistan, where he lived rough, sleeping where he could and battling drug addiction.

The 14-year-old was one of hundreds of Afghan runaways hooked on drugs and living on the streets in Pakistan, bedding down on roads, under bridges, at bus stops and around garbage dumps. Many of them work as garbage collectors. They wake up early in the morning and go to quiet spots to take heroin, opium and marijuana.

“I started with hashish when a friend offered me a cigarette, then I tried alcohol and heroin. I became addicted at a very young age,” Abdullah added.

There are more than 1.5 million Afghan refugees living in Pakistan, most displaced by the country’s nearly four decades of war, but the young runaways are among the most vulnerable. Many of them were displaced not by war but by violence at home and Pakistan offered if not a refuge, then at least an escape.

Abdullah began his journey with his head still bleeding from the beating his brother had given him. Stealing $80 from his family, he fled, catching a bus to the border with Pakistan and then a taxi to Rawalpindi. There, aged just 11, he worked as a loader in a fruit market and spent his nights in a haze of drugs and alcohol, sleeping huddled in a blanket on the roof of a mosque.

Government help exists for the likes of Abdullah, but it is limited, leaving organizations like the Dost Foundation, a local charity, to fill in the gaps.

“I want to join this center to rescue other children who have become addicted to drugs,” he said. “I feel sorry for them when I see them covered in filth, wearing dirty clothes, not washing for many days.”

By contrast, 15-year-old Asmatullah wants to see his family again and say sorry. He fled his home in November last year after his father beat him, and fell into drugs and alcohol while living rough in Peshawar. After nearly two months on the streets, a team from the Dost Foundation looking for kids in trouble picked him up.

“I regret what I’ve done. I realize I chose a bad life,” Asmatullah told AFP during a rehabilitation class at the charity’s center. “I will never use drugs again. I want to return to my family and apologize to them.”

The Foundation, which treats more than 300 children in its rehabilitation program at any one time, is trying to track down Asmatullah’s family. At the center, Asmatullah, Abdullah and the other children lead a calmer, safer life than on the streets.

After morning prayers, they have lectures about the hazards of drugs, music and dance sessions, and vocational training—sewing, embroidery, beadwork and painting.

Dost Foundation President Parveen Azam Khan says that the number of people with drug problems in Khyber-Pakhtunkhwa is growing every day. The province lies close to the border with Afghanistan, the source of 90 percent of the world’s heroin, almost half of which is channeled through Pakistan on its way to markets around the globe.

Khyber-Pakhtunkhwa has the highest rate of drug use in Pakistan, with more than one in 10 people using illegal substances, according to a 2013 report by the U.N. Office on Drugs and Crime (UNODC). Across Pakistan, 4.25 million people are dependent on drugs, the UNODC says, but the available treatment facilities can cope with just 30,000 patients a year.

Khan, herself a doctor, set up the Dost Foundation in 1992 as the civil war in Afghanistan drove up the supply of heroin. “This area became a place where full drugs were being produced in large quantity… and people started using them, with the result that drug users were all over but there was no treatment at all,” she said. “The government too has established some rehabilitation centers but they are insufficient for the number of addicts.”

Many former addicts are now drawing on their own experiences to help others. One of them, Afzal Shah, heads the foundation’s Reach Out Program to find addicted street children and bring them to the center.

“I was given a heroin-filled cigarette on my wedding night by a friend who told me it would enhance sexual pleasure,” said Shah. “I lost my health and eventually got so weak that I could not even move.”

When the Dost Foundation opened, Shah became one of its first patients and turned his life around. “The friend who first gave me the heroin-filled cigarette died long ago,” he said. “All my other friends who were addicted and never got treated also died, but I am still enjoying life and its pleasures.”