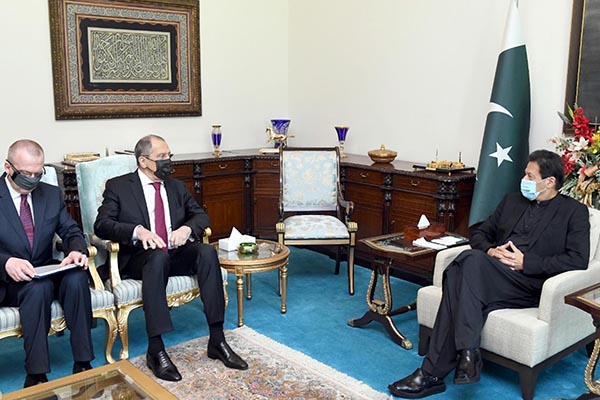 Pakistan and Russia on Wednesday pledged to increase cooperation in various areas of mutual interest, including defense and counter-terrorism.

In a joint press conference, Foreign Minister Shah Mehmood Qureshi and his Russian counterpart Sergey Lavrov said they had reviewed all aspects of their countries’ bilateral ties as well as the situation in neighboring Afghanistan. Lavrov said Russia was ready to provide military equipment to Pakistan to boost its counter-terrorism potential, adding this was “in the interest of all states” in the region.

The two sides, he said, had also agree to joint military exercises and drills. Referring to the situation in Afghanistan, he said Moscow and Islamabad had both agreed to facilitate the Taliban and the Kabul government in ending the Afghan conflict through inclusive political dialogue. “We have agreed to further contribute to creating conditions to ensure that the conflicting sides achieve constructive solutions, which will allow them to end the civil war in Afghanistan through the agreements on forming inclusive power structures,” said the Russian official.

Stressing that Russia wanted to promote bilateral cooperation with Pakistan in diverse fields, including economy, trade and defense, he noted that bilateral trade had increased by 46 percent in recent years, but could be increased and diversified even more. He said both countries were reviewing new methods to implement the Stream Gas Pipeline project, adding that once a deal was reached, construction on the project would start.

Referring to the coronavirus pandemic, Lavrov claimed Russia had provided 50,000 doses of the Sputnik-V vaccine to Pakistan and intended to provide 150,000 more. The 50,000 doses he referred to were procured by private companies and are being sold at a 300 percent mark-up in the open-market. There was no clarity on whether the additional doses would also be sold or would be offered to the government for distribution among the masses.

Qureshi, meanwhile, said Pakistan wanted a strong, multifaceted relationship with Russia. “There is a new approach and mindset in Pakistan for a relationship with Russia. We feel we have geographic proximity, and Russia is [also] a factor of stability in the region and the world at large,” he said, adding Moscow had always advocated primacy of international law and multilateralism in line with Pakistan’s principles.

He said both sides, during discussions on Wednesday, had agreed to hold an intergovernmental commission meeting in Moscow later this year. He hoped the meeting would help the two countries develop a more meaningful economic relationship.

The foreign minister claimed Russia had acknowledged Pakistan’s successful campaign against terrorism and extremism and noted that he had briefed Lavrov on the current situation in India-held Kashmir.

Noting that this was the first visit by a Russian foreign minister to Pakistan in nearly a decade, he hoped it would deepen the two nations’ ties.

Separately, the Russian foreign minister also met Prime Minister Imran Khan and discussed bilateral relations as well as issues of regional and global importance, according to a statement issued by the Prime Minister’s Office.

Recalling his meeting with President Vladimir Putin during the Shanghai Cooperation Organization summit in June 2019, Khan noted he had underscored a desire to take their bilateral relationship to a new level. Reiterating the importance Islamabad attaches to its relations with Moscow as a foreign policy priority, Khan reiterated Pakistan’s resolve to expedite the legal process for the “Pakistan Stream” (North-South) Gas Pipeline project and commence work on priority.

Both leaders agreed that that the intergovernmental commission meeting in Moscow later this year should deliberate on specific proposals and projects to enhance bilateral cooperation in the fields of energy, industrial modernization, railways and aviation.

The prime minister also highlighted the importance of the Afghan peace process and appreciated Russia’s efforts in helping achieve its goals. He stressed upon Lavrov that a peaceful resolution of the longstanding dispute of Jammu and Kashmir was essential for regional peace and prosperity.

Gen. Bajwa informed the foreign minister that Pakistan had no hostile designs toward any country and would keep working toward a cooperative regional framework based on sovereign equality and mutual progress. He said Islamabad welcomed all initiatives aimed at bringing peace and stability in Afghanistan, as this would benefit the whole region.

During their meeting, Lavrov acknowledged Pakistan’s achievements in the war against terrorism and its contributions for regional peace and stability.