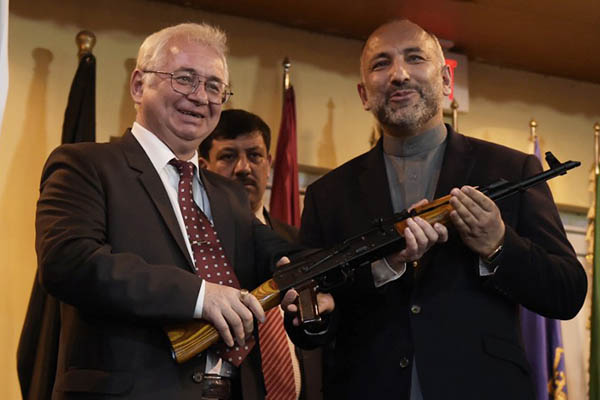 Assault rifles intended to be used against terrorists who pose ‘regional threat.’

Russia delivered 10,000 Kalashnikovs to the Afghan government on Wednesday, with officials saying they were for the fight “against terrorism,” a day after Kabul hosted talks on reviving the peace process with the Taliban.

The assault rifles, delivered with pomp at a ceremony on the tarmac at Kabul’s military airport, will be directly transferred to security forces, said President Ashraf Ghani’s national security adviser Hanif Atmar. “We are trying to continue our efforts for peace, but in the meantime our nation should have the ability to defend itself,” Atmar said.

He said “international terrorism” in Afghanistan was a threat not only to the country and the region, but also to “our friends in Russia.”

Despite the $60 billion spent by Washington over more than 14 years to equip and train the Afghan security forces, they have struggled to contain the resurgent Taliban.

Kabul is trying to resume a dialogue with the militants, and after talks with the U.S., China and Pakistan on Tuesday said it expects to relaunch the stalled peace process by early March.

Russia is not part of the quartet. In a recent interview with state news agency Ria Novosti, Zamir Kabulov, the Kremlin’s special representative to Afghanistan, described Washington’s efforts to restore peace as “futile.”

At Wednesday’s ceremony Russia’s ambassador in Kabul Alexander Mantitski said cooperation between his country, NATO and the United States in Afghanistan ended in April 2014 “at the initiative of the West.”

The decision was taken in retaliation for Russia’s annexation of Crimea.

However, the diplomat said Moscow would continue to cooperate directly with its Afghan partner.

Russia remains concerned about the growing influence of Islamic State in the east of the country, where the group counts fighters from Uzbekistan and Tajikistan—two former Soviet republics bordering Afghanistan—in its ranks.