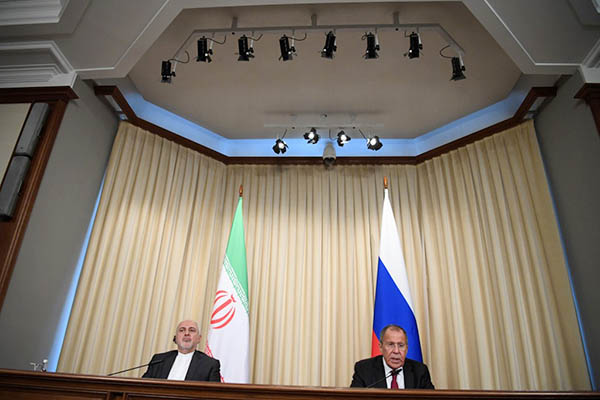 Moscow and Tehran on Monday blamed U.S. policies for tensions in the Middle East while Russia said it welcomed French efforts to save the Iran nuclear deal.

At the weekend U.S. forces attacked jihadist leaders in northwestern Syria, in what a battlefield monitor called a missile strike that left at least 40 dead.

“Together with Russia and Turkey, Iran has ensured relative security and calm in Syria,” Zarif told journalists after talks with Lavrov. “But the United States is creating a new unstable situation east of the Euphrates in Syria including through actions they’ve undertaken in Idlib.”

Moscow has said that the Americans hit the region “without advance notice to Russia or Turkey,” threatening a fragile ceasefire in the province of Idlib. Lavrov also accused Washington of seeking to “provoke” Tehran after the United States withdrew from the Iran nuclear deal last year. “Our American partners are openly seeking to provoke Iran with the support of some of their regional allies,” he said.

Lavrov commended France for trying to break the impasse and convince the United States to offer Iran some sort of relief from sanctions it has imposed on the Islamic republic. “We are hoping that this useful initiative of the French president will bear fruit,” he told reporters. “We wish them luck.”

But Zarif warned that Iran would continue to curtail its commitments under the 2015 deal if Europe did not protect Tehran from the U.S. sanctions. “We would of course take a third step,” Zarif said.

Iran has hit back with countermeasures in response to the U.S. withdrawal from the nuclear deal, which gave Tehran relief from sanctions in return for curbs on its nuclear program. It has been threatening to take a third step in reducing its commitments to the deal after already increasing its uranium enrichment and stockpile.