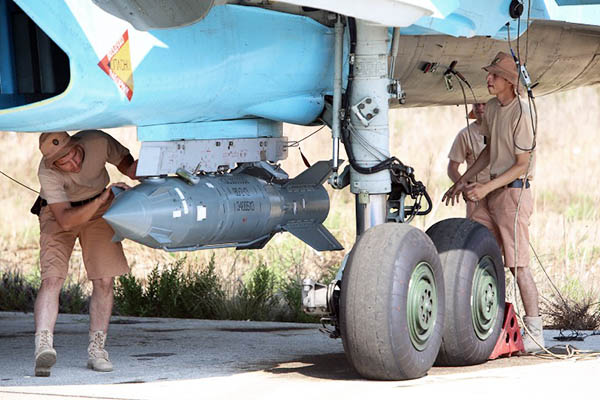 Russian defense ministry says its forces are undertaking a campaign of retribution.

Russia is pounding the Islamic State jihadists in Syria with bombs emblazoned with the words “For our people” and “For Paris” after Moscow vowed vengeance following the bombing of a plane over Sinai.

Russian television broadcast a video in which a man is seen scrawling “For our people!” and “For Paris!” in black pen on aerial bombs minutes before a warplane is set to take off from the country’s airbase in Syria. “For our people! For Paris! Pilots and technicians of #Hmeymim airbase sent a message to terrorists by airmail,” the Russian defense ministry said on its official Twitter account.

“The armed forces are conducting an aerial campaign of retribution,” the defense ministry said in a separate statement, adding the military had begun coordinating their operations with the French.

Earlier this week Russian President Vladimir Putin pledged to hunt down and “punish” those behind a bomb attack that brought down a passenger jet over Sinai last month, killing all 224 people, mostly Russian holidaymakers, on board.

After the carnage in Paris which claimed the lives of 130 people Putin and French President Francois Hollande agreed to “ensure closer contact and coordination” in their countries’ operations in Syria.

The two leaders will meet at the Kremlin next week.

Unverified images have been circulating on the Internet of Syria-bound U.S. missiles bearing the handwritten inscription “From Paris with love.”

Russia has been conducting a bombing campaign in Syria since Sept. 30, the country’s largest foreign intervention outside the former Soviet Union since the occupation of Afghanistan in 1979. The Islamic State group said it had bombed the Russian jet in Egypt in retaliation for the bombing raids.