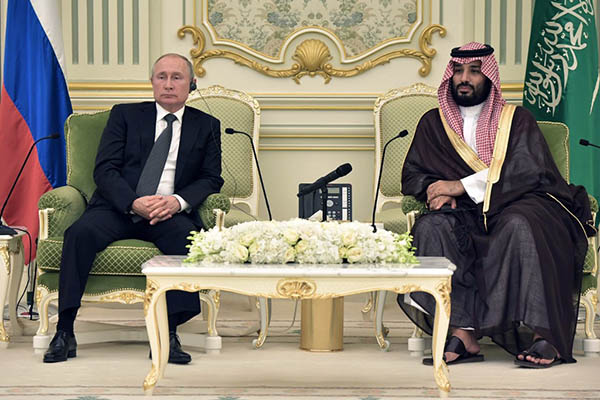 Russian President Vladimir Putin signed a key deal on Monday with Saudi Arabia during a key visit for an OPEC+ grouping aimed at stabilizing global oil prices and seeking to calm regional tensions with Iran.

Putin’s visit follows attacks on Saudi oil installations that Saudi Arabia and the United States have blamed on Iran, an ally of Moscow.

Following talks between Putin and Saudi King Salman, the two countries signed some 20 agreements and contracts worth billions of dollars on aerospace, culture, health, advanced technology and agriculture. Key among the deals was the agreement to bolster cooperation among the so-called OPEC+ countries—the Organization of the Petroleum Exporting Countries plus 10 non-members of the cartel.

Moscow is not a member of OPEC, but it has worked closely with the group to limit supply and push up prices after a 2014 slump that wreaked havoc on the economies of Russia and cartel heavyweight Saudi Arabia.

In October 2017, Russia and Saudi Arabia signed a memorandum of understanding paving the way for Riyadh’s purchase of Moscow’s powerful S-400 anti-aircraft missile systems. The sale never materialized, however, as Saudi Arabia eventually opted to purchase a U.S. system.

On Monday, Putin said “Russia attaches particular importance to the development of friendly, and mutually beneficial ties with Saudi Arabia.” King Salman told Putin: “We look forward to working with Your Excellency on everything that will bring security, stability and peace, confront extremism and terrorism and promote economic growth.”

Moscow and Riyadh, a traditional U.S. ally, have made a striking rapprochement in recent years, marked in particular by King Salman’s first visit to Russia in October 2017. A year later, when Saudi Crown Prince Mohamed bin Salman was under fire over the assassination of dissident journalist Jamal Khashoggi in Istanbul, Putin went out of his way to shake his hand at a G20 summit, to much comment.

In an interview with Arabic-language television channels ahead of his visit, Putin praised his good relations with the Saudi royals. “We will absolutely work with Saudi Arabia and our other partners and friends in the Arab world… to reduce to zero any attempt to destabilize the oil market,” he said.

Russian political analyst Fyodor Lukyanov said Moscow, with its older ties to Iran and new links with Saudi Arabia, could “play the role of peacemaker” as tensions soar between Tehran and Riyadh. These tensions spiked last month after the attacks on Saudi oil facilities that halved the kingdom’s crude output and set oil markets alight.

Yemen’s Iran-backed Houthi rebels claimed responsibility. But U.S. officials blamed Tehran, charging that the rebels did not have the range or sophistication to target the facilities. Tehran has denied involvement and warned of “total war” in the event of any attack on its territory.

Russia has sought to keep a foot in both camps, offering missiles to Riyadh to defend itself, while at the same time warning against “hasty conclusions” regarding Iran’s alleged involvement.

Last week, an Iranian tanker was hit in suspected missile strikes off the coast of Saudi Arabia, sparking fresh fears of war. Putin held talks with the crown prince late Monday to discuss “bilateral cooperation” and developments in Syria and Yemen.

Russia and Iran back Syrian President Bashar al-Assad, while the Saudis support the opposition seeking his ouster. But “it is important for Russia that an Arab country participates in the political settlement in Syria,” said Lukyanov. For now “only three non-Arab countries”—Turkey, Russia and Iran—are hosting talks, the analyst added.

After Saudi Arabia, Putin will travel to the United Arab Emirates on Tuesday to meet the powerful crown prince of Abu Dhabi, Mohammed bin Zayed Al-Nahyan.