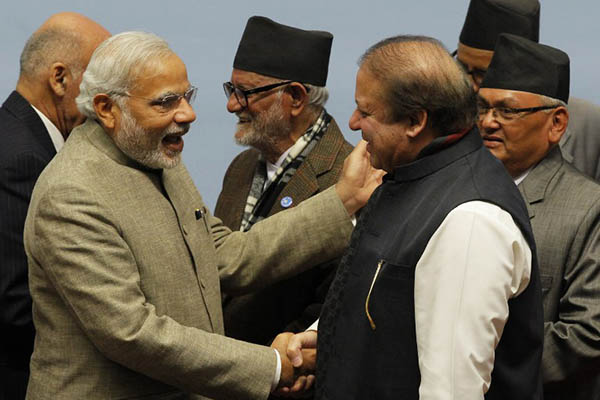 South Asian leaders signed an agreement to improve cross-border energy trade in the power-starved region on Thursday, as a summit overshadowed by India and Pakistan’s rivalry ended with little progress toward regional integration.

The prime minister of host country Nepal said the achievements of the South Asian Association for Regional Cooperation (SAARC) had fallen short, and urged fellow leaders to “summon the political will” to translate their words into action. “Despite several transformative potentials in the region, our achievement stands short of expectations,” said Sushil Koirala in a speech at the closing ceremony. “We alone are responsible for shortcomings in the SAARC process.”

The leaders of the eight SAARC countries had expressed frustration with the slow pace of progress toward greater regional integration since the group first launched nearly three decades ago. Analysts have blamed SAARC’s failure on the mutual mistrust between Pakistan and India, which has taken a more assertive stance toward its neighbor since the election of a Hindu nationalist government in May. The closing day of the summit coincided with a militant attack on an army patrol near the Pakistan border in violence-wracked Indian-administered Kashmir that left at least six people dead, three of them civilians.

India’s new Prime Minister Narendra Modi made pointed references in his summit speech on Wednesday to the deadly 2008 attacks in Mumbai, which India blamed on Pakistani militants. He also held formal talks on the two-day summit’s sidelines with every SAARC leader except Pakistan Prime Minister Nawaz Sharif. Both sides said it was up to the other to request a meeting.

India and Pakistan have been bitter and sometimes bloody rivals since gaining independence from Britain in 1947, and have fought three wars. The two countries’ leaders shook hands in front of television cameras at the closing ceremony, both grinning warmly. But the failure to sign two other proposed pacts, on road and rail connectivity, was seen as an indication of the group’s limitations.

The leaders only finalized the electricity pact on Thursday, under pressure to avoid what the Times of India newspaper called “another unproductive SAARC summit.”

“It’s not just Pakistan that plays a spoiler at SAARC summits, India too hasn’t taken this regional grouping seriously enough in the past,” the paper said in an editorial. “And other countries may just be tired of endless territorial quarrels between India and Pakistan usurping everything else at SAARC.” Pakistani daily Dawn was equally critical, saying SAARC had “collectively failed to make any progress.”

In a closing declaration, the summit members pledged to combat “terrorism and violent extremism in all its forms” and jumpstart “free trade in goods and services in the region.” Cross-border trade among the eight SAARC nations—Afghanistan, Bangladesh, Bhutan, India, Nepal, the Maldives, Pakistan and Sri Lanka—has grown from under $140 million in 2008 to $878 million in 2012. But it still accounts for less than five percent of total commerce in a region where many remain living in poverty.

Nepal’s Koirala said there was “no justification” for such deprivation in a region rich in natural resources. The region’s first summit in three years follows some of the worst cross-border violence in Kashmir in a decade, and comes as NATO-led troops prepare to pull out of Afghanistan, intensifying the India-Pakistan rivalry as the countries vie for influence there.

India angrily called off senior-level talks with Pakistan in August after Islamabad’s envoy held talks with Kashmiri separatists. “Nothing is going to change because of speeches by Indian or Pakistani leaders—it’s the same old game, there’s a positive-sounding declaration followed by violence followed by a breakdown in talks,” said the executive chairman of Kathmandu’s Nepal Center for Contemporary Studies, Lok Raj Baral. “Whether it concerns trade or terrorism, unless you translate statements into action, there is little point to holding the summit.” The next SAARC summit will be held in Islamabad in 2016, Koirala said.

I m agree with EU but not enough to push . EU must force to Pakistan to eliminate it from Law .