‘Sacrifice Today for a Better Tomorrow’ 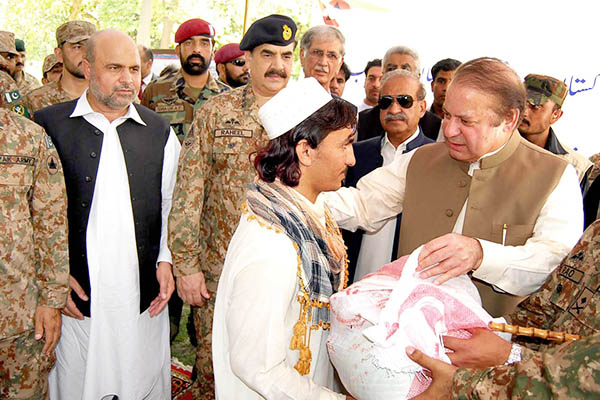 During a visit to IDP camps in Bannu, Sharif has pledged to develop and rehabilitate FATA after terrorists have been driven out.

Prime Minister Nawaz Sharif on Friday acknowledged the hardships facing the civilian population of North Waziristan and pledged to ensure all their needs would be met.

“We realize this is a very difficult time for you, and we are working day and night to ease your problems,” Sharif said during a visit to the internally displaced persons (IDPs) camps set up in Bannu.

Accompanied by Pakistan Army chief Gen. Raheel Sharif, Khyber-Pakhtunkhwa Governor Aftab Ahmed Khan, Chief Minister Pervez Khattak and federal information minister Pervez Rashid, the prime minister said the IDPs’ sacrifices would not be forgotten. “The IDPs are sacrificing their today for a better tomorrow for the entire country,” he said, adding, “Thanks to their sacrifices, the curse of terrorism will be rooted out of this country.”

The Pakistan Army launched the long-awaited Operation Zarb-e-Azb in North Waziristan on June 15, pledging to continue the assault until every single terrorist had been eliminated. According to ISPR, over 300 militants have been killed in the ongoing airstrikes. The offensive has prompted a mass exodus of the region, with over 400,000 IDPs fleeing the tribal area for the safety of Bannu and its adjacent areas. However, reports of IDP camps lacking basic facilities such as running water and electricity have prompted analysts and human rights activists to demand the government ensure the plight of the displaced is not ignored.

P.M. Sharif said the government was willing to allocate all available resources for the displaced. “The government will spend whatever is required for the IDPs, even if the amount reaches the billions or trillions,” he said. “The government is not doing this out of any sense of obligation—it is our duty and the due right of the IDPs,” he added.

Distributing relief goods and food amongst the IDPs, the prime minister said that arrangements had also been made to provide feed and fodder for the livestock of the IDPs. “Medical dispensaries will also be set up to provide free treatment and medicine to the displaced,” he said, adding that the Pakistan Army would administer polio vaccinations to everyone.

Sharif also assured the IDPs that the government would rehabilitate and rebuild FATA after it had been cleared of the Taliban. “We are currently working on plans to reconstruct damaged and destroyed houses in North Waziristan after the operation is over,” he said. “We want to simultaneously develop FATA by building new roads, providing running water and sanitation facilities, and other civic amenities so life in the tribal areas is on par with conditions in the rest of Pakistan,” he added.

The prime minister also praised the armed forces for their sacrifices and commitment to the fight against militancy. “The Army is giving their lives and salaries for IDPs, and for this they deserve praise from the whole nation,” he said. “God willing, terrorism will be banished and Pakistan will prosper,” he added.