Saif-ul-Malook Returns to Pakistan to Aid in Bibi Appeal 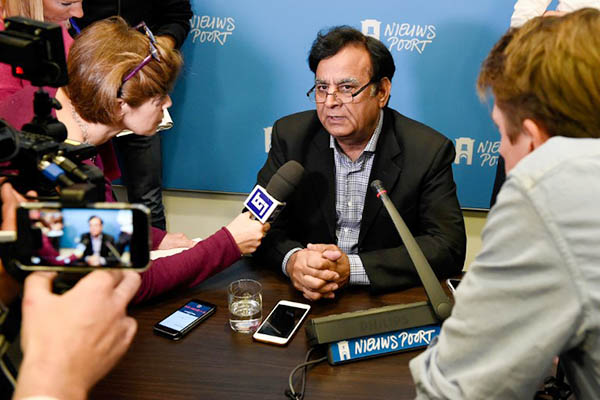 In choosing to return, the lawyer loses his asylum status in the Netherlands

The lawyer of a Pakistani Christian woman acquitted of blasphemy jetted out of the Netherlands on Saturday to “hopefully assist his client for the last time” in a court hearing, a Dutch M.P. said.

Saif-ul-Malook fled to the Netherlands from Pakistan in November last year after violent protests erupted over the Supreme Court’s decision to overturn the conviction of Aasia Bibi, who was on death row.

The Supreme Court will decide on Tuesday whether to allow an appeal against Bibi’s acquittal, lawyers in the case have said.

“He’s going back to Pakistan to hopefully represent Aasia for the last time in her case,” Voordewind said.

The Netherlands last year granted Malook a temporary stay, but Voordewind said Malook will “unfortunately lose his asylum status in the Netherlands.”

The allegations against Bibi date back to 2009, when Muslim women accused her of blasphemy against Islam’s Prophet, a charge punishable by death under the colonial-era legislation. Her case drew the attention of international rights groups and swiftly became the most high-profile in the country.

If the court refuses to allow the appeal, it will remove the last legal hurdle facing Bibi, who is a prime target in Muslim-majority Pakistan and remains in protective custody.