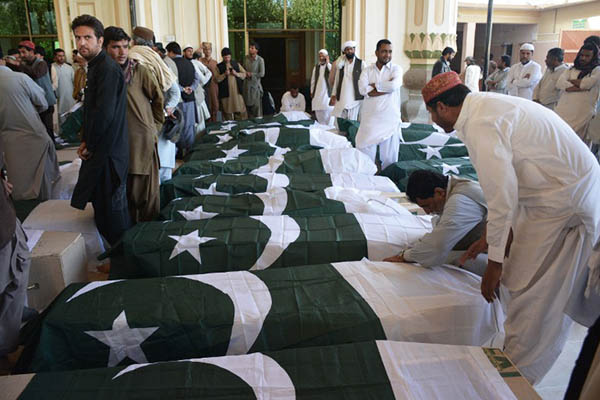 Islamabad has a shameful habit of forgetting its past.

“A meaningful policy-change can only be built on an explicit rejection of past policy. From the Afghan jihad in the 1980s to the state redirecting militant energies towards India-held Kashmir in the 1990s, Pakistan’s problem with militancy is rooted in deliberate choices that became self-inflicted wounds, but the state has never acknowledged this.”

There is also reference to the “armed jihad” of non-state actors and the false incrimination of former allies such as the United States with whom Pakistan fought its Afghan jihad and took a lot of dollars. Dollars also rolled in from “un-incriminated” Saudi Arabia, but there is a lack of conscience about the official mouthing of such “honest confessions” as “the war on terror was not our war” and the belief that the U.S. was in cahoots with India to harm Pakistan by using Taliban proxies hiding in Afghanistan. The unforgivable factor in the Aug. 8 killing of Quetta’s lawyers is the official “forgiving” of the Islamic State as the self-confessed perpetrator because India had to be blamed.

If the state acts in the manner noted by Justice Isa in his report, there must be deeper unexamined parts of the national psyche embedded in the Constitution that even the courts can’t question. Last week, in Chakwal, an armed gang attacked an Ahmadi place of worship—under law it can’t be identified as a “mosque”—but the police in their report described it as a quarrel between two parties and included the Ahmadis as offenders. Ahmadis—“manufactured” as a minority in 1974—are not Pakistan’s only embattled minority community. Christians too are attacked routinely, resulting in deaths and loss of property, as in 2009 at Gojra and in 2013 and 2014 across Pakistan while the state concocted ways of forgetting that it was moving toward its terminal crisis.