Sanctions End in Iran, But Doubts Remains About Better Times 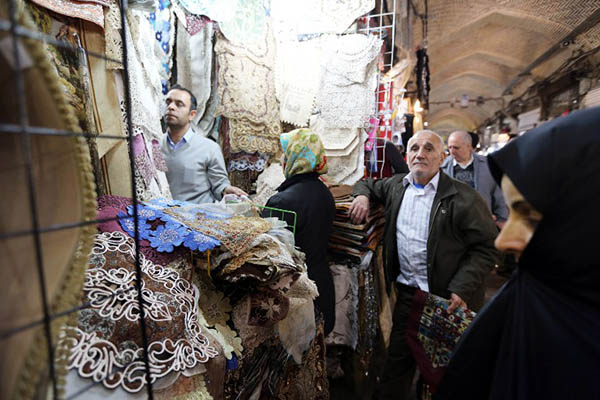 Traders fear their businesses will dry up as consumers opt for foreign brands.

Mohammad Ehsani has just about had enough. A trader in Tehran’s ancient Grand Bazaar, he doesn’t think the lifting of international sanctions on Iran will benefit him at all. “Business will become even worse,” he said, as one of his few customers haggled for a $2 towel to be sold even cheaper. His frustration obvious, Ehsani surrendered, selling the item at a barely break-even price. To him, an opening up of Iran’s economy after the nuclear deal with the West spells disaster.

“It will take a couple of years and a lot of local companies will go bankrupt during the transition,” he said, complaining of taxes of $7,000 a year, against sales of around $100 a day. “Customers will seek foreign brands. Domestic goods don’t have a chance. I plan to quit.”

Nuclear-related sanctions on Iran were lifted Saturday in Vienna, after U.N. inspectors said the Islamic republic had met commitments given under a deal last July to scale back its atomic program. With 79 million people, Iran’s economy has much potential if it becomes more accessible, as promised by President Hassan Rouhani, a moderate elected in 2013 on a pledge to end the nuclear crisis.

The United Nations first imposed economic sanctions in 2006 after Iran was suspected of trying to develop an atomic bomb under the guise of civilian energy production, something it has always denied. Not only did sanctions bar many companies it also stifled those who did business from operating freely. In 2012, the United States and the European Union ratcheted up the pressure, slapping punitive measures on Iran’s energy and banking sectors.

Re-admission to the SWIFT system of international transactions is likely to be transformational for liquidity—being shut out caused the economy to tank as cash dried up. But talk of a boom—foreign business delegations, particularly from Europe, surged after July’s final nuclear deal—seems a world away to Ehsan Ahmadi, a 30-year-old salesman, browsing in the bazaar.

“Removing sanctions will only benefit the government,” he said. “It doesn’t mean anything to us. It’s the people who feel the pain because prices will never go back to what they were.”

Inflation has been slashed to 13 percent during Rouhani’s presidency. It hit more than 40 percent under his hardline predecessor Mahmoud Ahmadinejad, eroding people’s savings and spending power. But the possibilities remain vast, according to Faranak Asgari, chief executive of tourism business ToIran.com, which is aiming to cash in on an influx of foreign travelers.

“This is the best news Iran has had in 37 years,” she said, a reference to the Islamic revolution of 1979, which ushered in clerical rule and a changed political and business environment. “Right now we have very low international investment. It may take a few years but it brings great opportunities for a large untapped market like ours. It will help the people economically,” she said.

The lifting of sanctions, the main reason Iran’s supreme leader Ayatollah Ali Khamenei backed Rouhani’s government in the nuclear talks, could also mark a psychological shift among skeptical foreigners. “When under sanctions people think ‘they are terrorists’,” Asgari said of some perceptions of Iran. “The world is afraid. Sanctions are not just economic. They also intimidate people.”

Deep problems, however, must be addressed. Iran needs billions of dollars of investment. Plummeting oil prices—gross domestic product fell to $415 billion in 2014 from $576 billion in 2011—has led Rouhani to seek a less oil-based economy. Only 25 percent of next year’s budget is forecast to come from selling crude.

But last November the government outlined 50 oil and gas projects, inviting international oil and gas companies to invest $25 billion under improved contractual terms. Other industries in need of Western technology and modernization, such as aviation, auto production and tourism, are expected to make similar offers.

A Western diplomat based in Brussels insisted the nuclear deal was a security decision and not business based, yet it aimed to ensure there are no legal barriers to investing in Iran. “But we have to be realistic, and not expect that on the first day everything will be smooth,” he said.

Saaed Laylaz, a leading economist in Tehran, said the nuclear deal provides a foundation for Rouhani to reform an economy long-plagued by allegations of cronyism among elites. “I am relatively optimistic,” he said. “The supreme leader and the president are on the same page in the need for a stronger economy. The private sector should now come to the fore. It must happen,” he added.