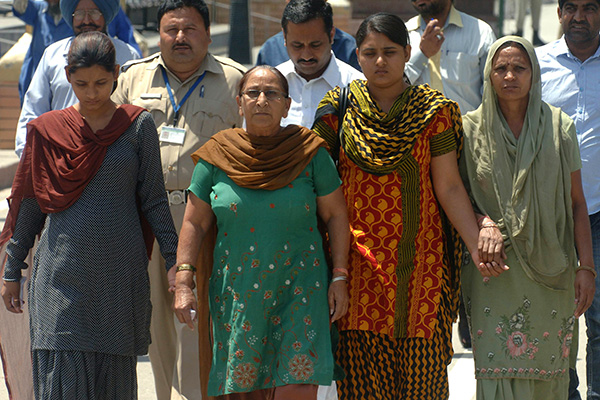 Pakistan has charged two prisoners with the murder of Singh, as India demands justice.

An Indian national, sentenced to death row in Pakistan over 16 years ago for espionage, has died of injuries sustained in an attack last week by fellow inmates, his lawyer said Thursday.

Sarabjit Singh, who was convicted over deadly bombings in 1990, died at 1 a.m. local time after lying in a coma for five days, a senior doctor at Jinnah Hospital in Lahore said. Singh’s lawyer Awais Sheikh confirmed the 49-year-old’s death and said his body had been moved to the hospital mortuary. The doctor said arrangements were underway for an autopsy.

The death has drawn criticism from Indian Prime Minister Manmohan Singh, who posted on his official Twitter page: “The criminals responsible for the barbaric and murderous attack on Sarabjit Singh must be brought to justice.”

The prime minister added that New Delhi would make necessary arrangements to bring his body home for funeral rites, after earlier negotiations to treat the jailed spy in India or a third country failed.

A senior official in Delhi said earlier this week that diplomats from their high commission in Islamabad were not allowed to visit Singh in hospital, and had also complained about a lack of information on his condition. The Pakistan foreign ministry however insisted Indian diplomats in Lahore were given access to Singh on two occasions.

Singh suffered multiple serious injuries when six prisoners attacked him on April 26 at Lahore’s Kot Lakhpat Jail, hitting him on the head with bricks and fracturing his skull. “His condition was more than critical and he had little chance of survival,” Sheikh said.

Following Singh’s death, Pakistan has charged two prisoners with his murder. “We have added a murder clause to the police complaint,” Tariq Mehmood, a police official at Lahore’s Kot Lakhpat police station, said. The two suspects were taken into custody immediately after last week’s attack. The motive has been unclear, but police say an initial investigation pointed to an exchange of “hot words” with Singh.

According to lawyer Sheikh, his client was threatened with bodily harm following the execution of a Kashmiri separatist in India. Afzal Guru was hanged in New Delhi on Feb. 9 for his part in an Islamist attack on India’s Parliament in 2001.

Singh was convicted for his alleged involvement in a string of bomb attacks in Pakistan’s Punjab province that killed 14 people in 1990. The courts and former president Pervez Musharraf rejected his mercy petitions. His family insisted he is merely a farmer who became a victim of mistaken identity after inadvertently straying across the border while drunk.

Four members of Singh’s family—his wife, two daughters, and his sister—who travelled to Lahore on Tuesday have since returned to India, according to the Press Trust of India, which cited Indian authorities as saying that the family had asked for Singh to be cremated with full state honors, and that the government would meet on Thursday to consider the request.

India’s foreign ministry spokesman Syed Akbaruddin has called for Pakistan to conduct an investigation into the prison attack. “This was, put simply, the killing of our citizen while in the custody of Pakistan jail authorities,” he told India’s ANI news agency. “The shocking attack highlights the need for concerted action by Pakistan to safeguard Indians in Pakistan prisons.”

The nongovernmental Human Rights Commission of Pakistan has also condemned the attack on Singh as a “dastardly act” and called on the government to conduct a thorough inquiry into the matter and punish those found guilty. “The authorities have obviously failed to do their elementary duty” of providing him safety and security, the commission said in a statement.

The attack made front-page news in Indian newspapers, with Indian television stations running frequent updates on his condition. Pakistan last year released an Indian man who had served three decades in a Pakistani jail on espionage charges.