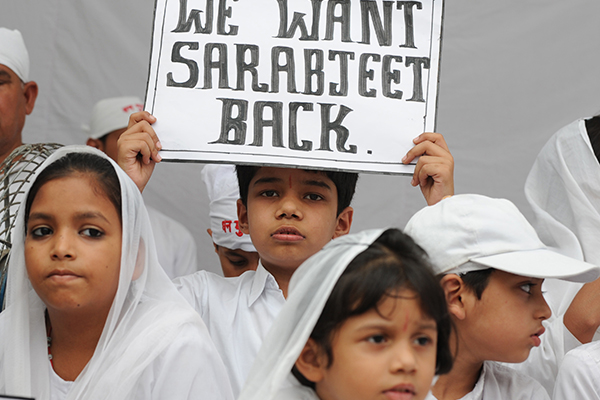 An Indian national on death row in Pakistan who was attacked by fellow inmates armed with bricks has been put on a ventilator as he fights for his life, officials said on Saturday.

Sarabjit Singh, who was sentenced to death 16 years ago on espionage charges, was rushed to hospital Friday with multiple wounds, including a severe head injury, after an argument in Lahore’s Kot Lakhpat Jail.

“Singh’s condition is critical with multiple wounds on his head, abdomen, jaws, and other body parts, and he has been put on ventilator,” a senior doctor at Lahore’s Jinnah hospital said. Singh is fighting for his life in the hospital’s intensive-care unit, and the next 24 hours are critical, the doctor said, adding that the head injury was “quite severe.” “He needs surgery, but the doctors are not performing it because they don’t want to take any chances and want him to stabilize.”

Singh was hit with bricks and other blunt objects by two inmates, a police officer investigating the case said, identifying the suspects only by single names, Aamir and Mudasir. “These inmates attacked Singh while he was doing his evening walk. We don’t exactly know at the moment what the reason was for this attack, but initial investigation reveals that they had exchanged hot words with Singh,” he said on condition of anonymity.

Awais Sheikh, Singh’s lawyer, said his client had received threats following the execution of a Kashmiri separatist in India. Mohammed Afzal Guru was hanged in New Delhi on Feb. 9 for his part in a deadly Islamist attack on the Indian Parliament in 2001.

The attack on Singh was front-page news in Indian newspapers on Saturday, with Indian television stations running frequent updates on his condition and Prime Minister Manmohan Singh describing it as a “very sad incident,” according to the Press Trust of India news agency.

Dalbir Kaur, Sarabjit Singh’s sister, said Indian government officials had told her that Pakistan has granted visas for four family members to travel to Lahore and is also allowing one person to stay with him in the hospital. “We want to be with Sarabjeet in this difficult time. He is all alone. We don’t even know what his condition is,” she said.

Singh was arrested following a bombing in Lahore in 1990 in which 14 people were killed. He was sentenced to death after being convicted by a Pakistani court on spying charges. His family has filed mercy petitions to Pakistani authorities seeking Singh’s release.

Pakistan maintains he was an Indian spy, but Singh’s family say he is a farmer who accidentally crossed the border into Pakistan while drunk. Pakistan last year released an Indian man who had served three decades in a Pakistani jail on espionage charges.

In exchange for…? What about our Pakistani prisoner in your jails?

Should have hanged this terrorist long time ago.