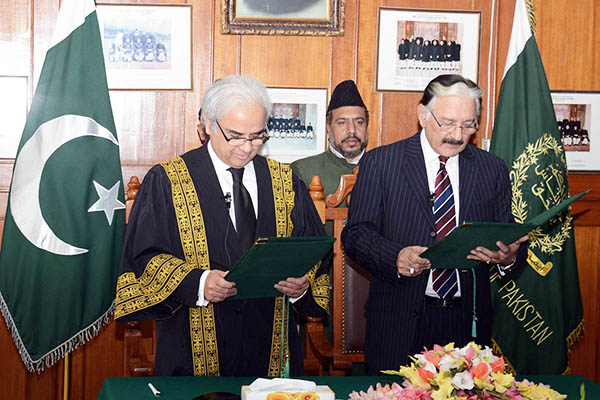 Pakistan’s new chief election commissioner took his oath of office Saturday as opposition protests for a probe into allegations of vote rigging by Prime Minister Nawaz Sharif run into their fourth month.

Sardar Muhammad Raza, 69, a retired Supreme Court judge and chief of the shariah court, was sworn in as chief election commissioner by Supreme Court Chief Justice Nasir-ul-Mulk, the Supreme Court said in a statement on Saturday.

The Election Commission had been without a permanent chief since the previous chief, Fakhruddin G. Ebrahim, resigned in July last year after the Supreme Court ordered him to change the dates of presidential elections.

Ebrahim conducted the landmark May 2013 elections, which for the first time saw the transition from one civilian government to another. But cricketer-turned-opposition leader Imran Khan has alleged massive vote rigging took place during those polls.

Khan has been holding demonstrations around the country since mid-August to force Sharif to step down and earlier this week he warned he would “shut down the whole of Pakistan” as part of a bid to topple the government.

His campaign is losing momentum, but Khan has warned that on Dec. 16 he and his supporters would paralyze major cities starting with Lahore, Sharif’s seat of power.

Followers of Khan and firebrand cleric Tahir-ul-Qadri clashed with police in late August after they tried to storm the prime minister’s residence, leaving three demonstrators dead and hundreds injured on both sides.

On Sept. 1, the opposition groups briefly occupied the state broadcaster, raising fears the military could intervene to end the crisis as it has done in the past.

Analysts believe the protests were coordinated by the Army as a means of re-asserting its dominance over civilian authorities. The protests destabilized the PMLN government and dented foreign investors’ confidence, but have so far failed in their stated aim of bringing down his administration. The administration has responded by briefly suspending pro-opposition TV channels and buying attack adverts against Khan.