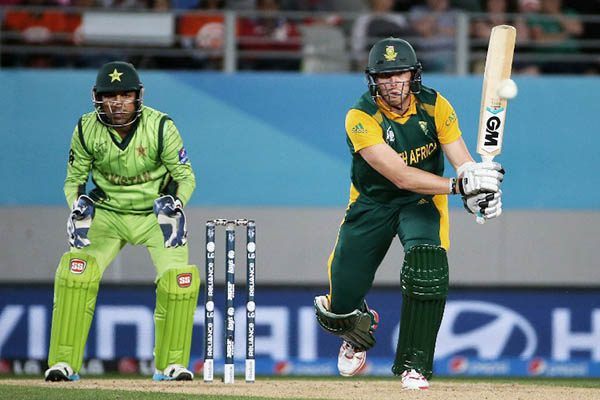 The wicketkeeper caught six balls behind the stumps in his World Cup debut.

Recalled Pakistan wicketkeeper-batsman Sarfraz Ahmed said Sunday he was excited at being bracketed with Australia great Adam Gilchrist after equaling the record for most catches behind the stumps in a one-day international innings.

The 27-year-old, who did not feature in Pakistan’s first four matches of the World Cup, marked his debut at this tournament in style with a run-a-ball 49 before holding six catches in Pakistan’s 29-run Pool B victory over South Africa in Auckland on Saturday that gave his side a chance of a quarter-final spot.

“It’s a great honor,” said Ahmed. “I didn’t know about the record but after the match someone told me that I have equaled Gilchrist’s record and that made me proud.”

Gilchrist became the first of seven keepers to take six catches behind the stumps when he achieved the feat against South Africa at Cape Town in 2000. He repeated the feat four times, while Alec Stewart (England), Mark Boucher (South Africa), Matt Prior (England), Jos Buttler (England), Matthew Cross (Scotland) and now Sarfraz have all since equaled the now retired Australian’s achievement.

Ahmed said his catch to dismiss South African master blaster A.B. de Villiers was the most important of all his dismissals on Saturday.

“A.B. is the most destructive batsman of all and he was threatening to take the game away,” said Ahmed of the South Africa skipper, who smashed a 58-ball 77 with five sixes and seven boundaries. But once de Villiers was caught behind off paceman Sohail Khan, Pakistan sealed the match by defending a revised 232-run target after rain twice interrupted their innings.

Earlier, opening batsman Ahmed launched Pakistan’s innings in style before running himself out. Ahmed said the key to his impressive knock was that he batted with a plan.

“The coach [Waqar Younis] and captain [Misbah-ul-Haq] told me to bat in my style and after the first ball I realized that I have to play out of my crease to negate the swing and that worked for me,” said Ahmed. “I didn’t look at who was bowling because South Africa have great bowlers. I only saw the ball and hit through the line and I am happy to score valuable runs.”

The top four from each of the two pools of seven will qualify for the last eight.