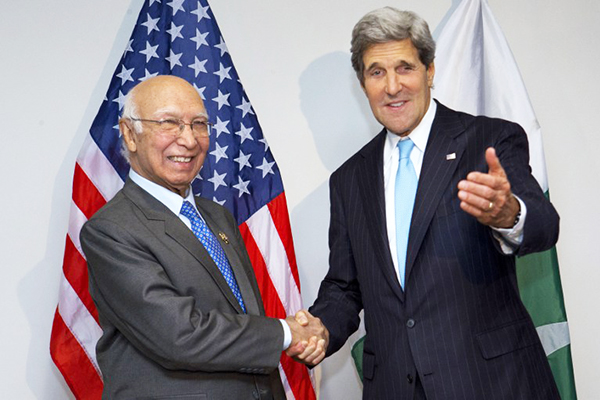 Foreign policy being reoriented to make good on Nawaz Sharif’s campaign promise of an economic revival.

Pakistan has asked the United States for greater economic support and lockstep measures to manage the peaceful withdrawal of foreign troops from Afghanistan next year.

Aziz asked Kerry—one of the authors of the $7.5-billion Enhanced Partnership with Pakistan Act of 2009—to assist Pakistani exports gain competitive access to American markets and target doubling the annual Pakistan-U.S. trade volume to $10 billion in five years.

Aziz said Islamabad requires international support in realizing its objective of an economic revival, which is vital for Pakistan’s socioeconomic development as a response to the ongoing militancy. The country’s foreign policy is being reoriented accordingly, he told Kerry according to Pakistan’s Foreign Office sources.

Kerry, who is scheduled to visit Pakistan this month, urged the importance of improving law and order in Pakistan to facilitate and sustain foreign direct investment and partnerships.

The two also discussed Afghanistan and agreed that bilateral cooperation was necessary to ensure the peaceful withdrawal of the bulk of foreign troops from the war-torn country by next year. Aziz emphasized the need for holding the next round of the ministerial-level Strategic Dialogue between Islamabad and Washington at the earliest.