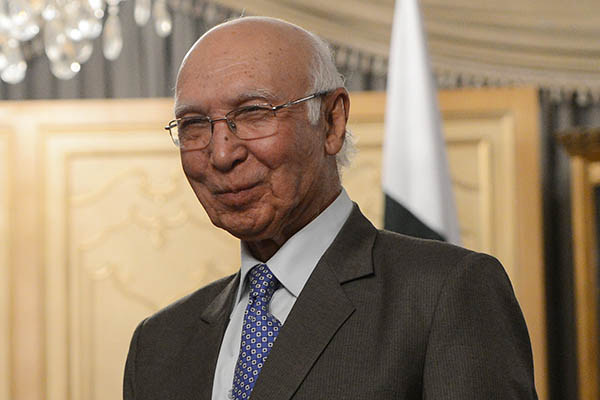 A senior Pakistani official flew to Afghanistan on Sunday, inviting President Hamid Karzai to Islamabad as part of a charm offensive designed to improve strained relations and help peace efforts with the Taliban.

“I have brought a message of cordiality and goodwill for Afghanistan,” Aziz told a news conference in Kabul. “The main purpose of my visit, as some of you may know, is to convey a formal invitation from Prime Minister Nawaz Sharif to President Karzai to visit Pakistan.”

Around 100,000 U.S.-led foreign troops fighting the Taliban are due to leave Afghanistan next year just months after presidential elections in April. Karzai is ineligible to run for re-election after serving a maximum two terms.

“We wish Afghanistan a success for those two important milestones,” Aziz said, reiterating Islamabad’s support for an “Afghan-led” peace process with the Taliban. “For us, a peaceful, stable and united Afghanistan is in the interest of Pakistan,” he added, calling for a “close relationship” with Afghanistan.

Earlier this week Karzai’s chief of staff, Karim Khorram, claimed a Taliban office that recently opened in Qatar was part of a plot to break up Afghanistan, orchestrated by either Pakistan or the United States.

The West considers Pakistan’s support vital to achieving lasting peace with the Taliban in Afghanistan. But relations between the two neighbors are mired in mutual distrust and accusations over Taliban violence, which plagues both countries.

Sharif kept the foreign affairs portfolio under his own control after winning the May general election. But Aziz, an elder statesman who served as a minister in the 1990s, is effectively the foreign minister.

Pakistani officials have said Aziz’s talks in Kabul will focus on ways to promote reconciliation in Afghanistan since the Doha office opened on June 18. It was initially hailed as a first step towards a peace deal after 12 years of war, but a furious Karzai slammed the office as an unofficial embassy for a Taliban government-in-exile.

The Taliban have since claimed to have temporarily closed the office, blaming “broken promises” by the Afghan government and the United States.