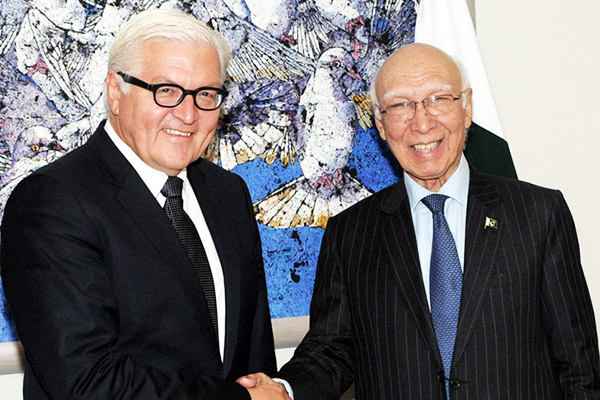 Pakistan’s top diplomat said Monday that military offensives in its tribal areas had almost wiped out the Haqqani network known for its audacious attacks across the border on Afghan and foreign forces.

The United States holds the Taliban-affiliated group responsible for some of the deadliest strikes of the insurgency, including the 2009 Camp Chapman bombing, which killed seven CIA agents.

According to a report in the Wall Street Journal, U.S. national security adviser Susan Rice told Pakistani leaders during a visit to Islamabad Sunday that attacks in Afghanistan by forces based in Pakistan were “absolutely unacceptable.” Future payments of hundreds of millions of dollars in U.S. military aid to Pakistan are also contingent on Islamabad taking effective action against the group.

But at a press conference with visiting German foreign minister Frank-Walter Steinmeier, Sartaj Aziz, Pakistan’s adviser to the prime minister on foreign affairs, said most of the Haqqani network’s base had been destroyed by an Army operation that began in North Waziristan last year.

“The infrastructure of Haqqani network in North Waziristan, which includes IED factories and a number of other capacities including communications, has been disrupted,” Aziz said. “So what is left here may be very limited compared to the capacity they still have in Afghanistan,” he added.

“Our assessment is that their capacity in Afghanistan is much bigger, probably 80 to 90 percent compared to what is here and it is also being cleaned out as a part of our operations.”

Aziz’s comments come at a time of tense relations between Kabul and Islamabad, with Afghan President Ashraf Ghani recently accusing Pakistan of sending “messages of war” following a spate of attacks on the capital city. Islamabad responded by summoning Afghanistan’s ambassador over what it called a “smear campaign.”

The Haqqani network was set up in the 1970s as an Islamist force to oppose the Marxist regime in Kabul and its Soviet backers, and fought in the Afghan civil war. The Haqqanis are seen as close to hardline elements in Pakistani military intelligence and the group’s leader Sirajuddin Haqqani was last month named as one of two deputy leaders of the Afghan Taliban.

Sirajuddin has long been one of Washington’s most important targets, and was joined last week by his brother Abdul Aziz Haqqani on the blacklist of “specially designated global terrorists.”