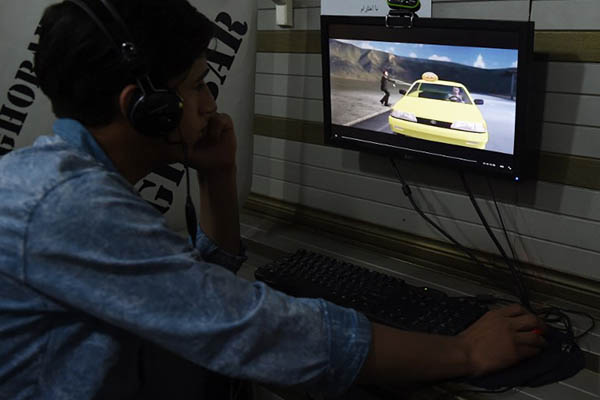 Lampooning Afghanistan’s political elite, Facebook page has drawn ire of officials who have rounded up people suspected of running the account.

From ridiculing warlords to poking fun at the political elite, a crop of covertly run Afghan satirical outlets are resonating widely with disenchanted citizens—and provoking the ire of officials.

A blend of humor and scathing wit, the page launched by an unknown Afghan in April depicted a yellow Toyota taxi with its motto scrawled on its rear windscreen: “Life is bitter and the future uncertain.” It tapped into widespread angst over corruption and political dysfunction.

Posts depicted high-profile politicians and bureaucrats squeezing into the back seat and descending into petty bickering and mocking conversations. Passengers have included President Ashraf Ghani and his ally in the national unity government, Abdullah Abdullah. But the Facebook page invited trouble when it targeted Hanif Atmar, the powerful national security adviser.

A Kabul Taxi post describes picking up Atmar and his 27 children, who are introduced as part of an oversized entourage of advisers hired on hefty salaries. The post mocks a recruitment process seen by Afghans as nepotistic and prone to favoritism.

Atmar was not amused, ordering the grilling of journalists rumored to be behind Kabul Taxi on suspicion of exposing state secrets by naming his advisers. Defenders in the Afghan media pointed out the names of Atmar’s staff were already posted on a government Facebook page—along with their photos.

“The government considers satire as terrorism,” Kabul Taxi wrote in the aftermath of the controversy, which sent its fan base soaring with the number of “likes” nearly doubling to 60,000 and provoking an outpouring of public support before it was suddenly taken down. “The Afghan National Security Council (NSC) should be chasing suicide bombers, not the driver of a taxi,” wrote one Facebook user.

Efforts to apprehend the page administrator incited an outpouring of ridicule for Atmar. One animated video on Facebook shows him chasing a taxi, which mischievously lurches forward every time he tries to get in.

The booming genre of political satire has a special place in Afghanistan, where all major problems plaguing the country—militancy, warlords and corruption—seem linked to what many describe as the venality of politics. Politicians are widely berated as insincere, power hungry and concerned only about the welfare of their own ethnic groups.

“The role of satire in Afghanistan is to keep influential people, especially politicians, on their toes,” said a co-founder of Afghan Onion, a new English-language satirical website that pays tribute to the U.S. website of the same name. “It is to make them aware that they are being watched with an eagle eye—if not by corrupt authorities then by the public who can expose them,” the anonymous co-founder told AFP. But the crackdown on Kabul Taxi has raised concerns over free speech in Afghanistan, which ranks 122nd out of 180 countries in the 2015 Reporters Without Borders press freedom index.

Human Rights Watch has documented increasing intimidation and violence against the Afghan media over the past two years as international support wanes amid a drawdown of foreign troops. But political satire will thrive despite the risks, said Jalal Noorani, author of a forthcoming book Art of Satire.

“Satire has survived the rigors of time. It survived the Taliban, the mujahideen, the civil war,” Noorani, 66, told AFP. “You can try to restrict satirists, even imprison them, but you cannot stop the flow of satire,” he said. “The post-Taliban era is… a golden age of bold, fearless satire.”

But Masouda Khazan Tokhi, the editor of a satirical monthly called Achar Kharboza (Melon Pickle), says she has fielded threatening calls even for benign posts mocking the sartorial choices of some politicians.

The co-founder of Afghan Onion said running a satirical site is a “calculated risk,” but no one is off-limits to mockery and ridicule.

After insurgents brazenly stormed a prison this week, freeing dozens of Taliban inmates, the site posted: “[Atmar’s] NSC claims they are chasing the Taliban escapees in Kabul Taxi.”