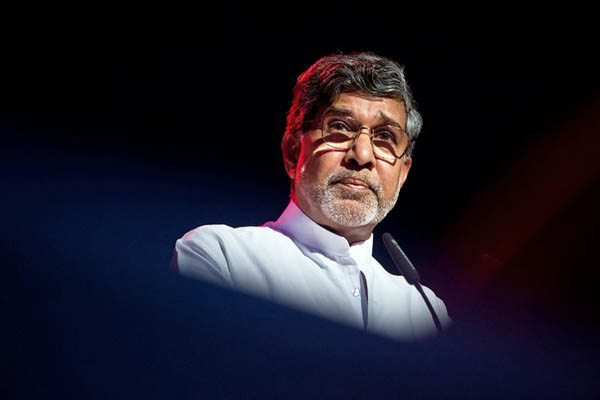 Nobel laureate says up to 500,000 children are being used as soldiers, adding more funding for education can help end this abuse.

There are up to 500,000 child soldiers around the world, Nobel laureate and child rights activist Kailash Satyarthi said Friday, terming it the worst form of child abuse.

Satyarthi, who is attending an International Labor Organization summit in Geneva, said global funding for education—the best means to fight child labor and servitude—had gone down dramatically over the past four years. “There are between 400,000 and 500,000 child soldiers across the world but the actual numbers could be far higher because there are hidden militant groups kidnapping children and forcing them to use guns,” he told reporters.

Satyarthi, whose decades long campaign to end child labor in India and elsewhere won him the Nobel Peace prize last year, said: “making children kill people is the worst thing you can do to a child.”

“Look at what’s happening in Syria, in Iraq, Nigeria and in Afghanistan,” he said. “When I read that a five-year-old child is given a gun to kill an opponent of a militia group in Iraq… and the child could not handle that gun, he was buried alive… That makes me angry. I think this should make you all angry,” he told the summit on Thursday.

Satyarthi said that global funding for education had plummeted in recent years “partly due to the financial crisis and partly due to donors’ perceptions that education had made huge strides in developing countries when the case is not actually so.”

All the world’s children could access basic education if global annual funding for the sector was increased by $22 billion, he said, adding that there were 58 million children currently out of school across the world. “I have been advocating for the last 35 years that eradication of child labor and quality education are the two sides of the same coin. We cannot achieve the one without the other,” he said. “Unfortunately only one percent of the total humanitarian aid goes for education. An additional $22 billion annually can bring all children to school and that is just four-and-a-half days of global military expenditure. If we all decide that we are not going to fight, or strike… for four-and-a-half days we are going to bring all children to schools,” he added.

According to the ILO there are 168 million children in child labor, with 150 million of them aged between five and 14. Of them five million are thought to be trapped in slavery-like conditions.

Satyarthi said “millions of children in the world are living in danger… When we read in the newspaper that girls were being sold for sex slavery… for a price less than a cigarette pack in Syria, I feel ashamed.”

What you said is right, AND i FULLY SUPPORT YOUR VIEWS ON ABUSING CHILDREN, THAT SHOULD BE STOPPED IMMEDIATELY. But things will not be perfect only by funding. The fund should be used practically to benefit the children. And we have to re-define education. Education should not be just a pushing to schools an colleges and spend their valuable 10 or 15 years, as a loss to him and his family, earning or learning nothing, for his life or for his society, that’s happening in India now a days. But we have to think the old concept of Gandhi, about the basic education, teaching how to earn one’s own living, by learning some work as per his or her aspirations, attitude, aptitude and talents, and let him study things by playing on his working tools and let him start studying through his work, that he is interested upon, without having any compulsion from any side. Let our child see the nature and let him study from nature, how we should contribute and compensate the nature by ourselves.
It is not the labor, that we should be worried about but his living environment and the protection and safety of a child, in his working and learning process,As a matter of fact, a good father and mother, nowhere in the world, want their children to be idle, not doing any work at home. We are forcing him to study what we like and we want to make him as we like, involving much labor to the child. And Doctor’s children would become Doctor and Engineer’s son would become Engineer and so on in our country. Can any one consider this as a child labor, but in fact, if we give a common definition, this also would become under the label of Child labor.
So let us bring the whole child community under one banner to learn and earn some thing for to protect themselves and for the community, they live.Let our people be more practical in planning education , at least for the next generation. Thank you I am with you.

SINCERELY
CP RAJASEKHARAN
(WRITER & BROADCASTER from Kerala
Presently in Delhi
cp99rajsekhar@gmail.com
9447814101
My daughter Rajkeerthy was working with you in your office for some time in 2012 – 13)