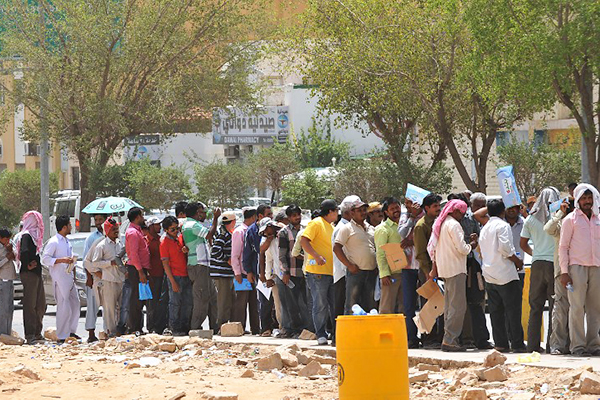 King Abdullah has ordered “extending the time limit” of the amnesty offer, which was due to expire on Wednesday, until November, the interior ministry said in a statement carried by the official SPA news agency.

The ruler of the oil powerhouse had announced the amnesty on April 3, granting foreign workers a three-month grace period to regularize their residency or leave Saudi Arabia to avoid being jailed, fined or placed on a blacklist.

According to the labor ministry more than 1.5 million illegal foreign workers have come forward so far. Of these, some 180,000 have left the kingdom in addition to more than 200,000 unregistered workers expelled at the start of the year under new regulations to stamp out illegal immigration.

Foreigners desperate to work in the country are willing to pay for sponsorship, and sponsoring expatriates has become a lucrative business for some Saudis. But under the new rules workers can be employed only by their own sponsors.

Rules mainly impact low-paid workers, most of who are from India, Bangladesh, Pakistan, and Indonesia, but with some from Yemen and Egypt as well. They had been fearful of the campaign of arrests promised by authorities once the amnesty expires.

Saudi Arabia, the world’s largest oil exporter, is a goldmine for millions of people from poor Asian and Arab countries where unemployment is high. According to official statistics, eight million expatriates work in the kingdom, where there are reportedly around two million illegal workers.

The new labor ministry regulations aim to reduce the number of foreign workers to create jobs for millions of unemployed Saudis. Although the country has the largest Arab economy, its unemployment rate is above 12.5 percent.

Good news for poor workers. Great news for construction industry. They were the worst sufferrer as Saudi skilled or unskilled workers are not willing to work in this scortching heat.