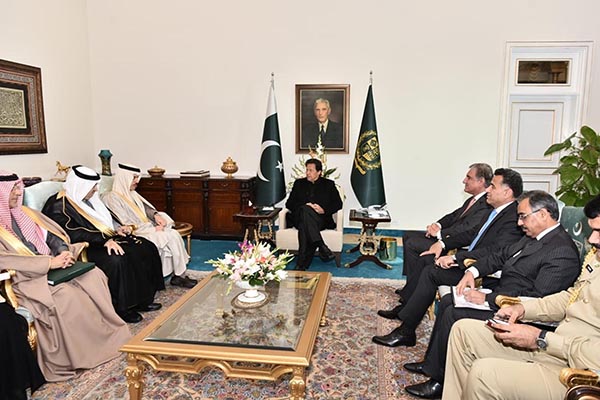 In visit to Islamabad, Gulf kingdom’s foreign minister discusses role of OIC in advancing cause of residents of India-held Kashmir

The leadership of Saudi Arabia appreciates the role Pakistan has played in maintaining peace and stability in its immediate region, Saudi Foreign Minister Prince Faisal bin Farhan al-Saud said during a trip to Islamabad on Thursday.

Speaking during a meeting with his Pakistani counterpart, Shah Mehmood Qureshi, the prince stressed on the importance of fraternal and strategic ties between Islamabad and Riyadh. According to a statement issued by Pakistan’s Foreign Office, the two officials discussed a wide range of bilateral issues, as well as regional developments, especially concerning India and Jammu and Kashmir.

The daylong trip was Prince Faisal’s first visit to Pakistan, and was reportedly organized to dispel speculation that Saudi Arabia pressured Pakistan into withdrawing from the Kuala Lumpur Summit, as alleged by Turkey President Recep Tayyip Erdogan. Islamabad’s last-minute decision to skip the summit organized by Malaysian Prime Minister Mahathir Mohamad has been termed a “great embarrassment” by observers, with Qureshi admitting that Islamabad decided not to attend because it could not allay Riyadh’s concerns that the event might supplant the Saudi-led Organization of Islamic Cooperation as the primary body dealing with issues facing the Muslim Ummah.

In addition to a meeting with Qureshi, Prince Faisal also met Prime Minister Imran Khan, with both side reiterating their commitment to maintain frequent high-level contacts and forge closer collaboration on bilateral matters and regional issues.

During his meeting with Faisal, Qureshi stressed that the relationship between Pakistan and Saudi Arabia was deep-rooted and longstanding. The two leaders discussed matters of mutual interest, including bilateral trade and economic cooperation, security and defense cooperation, parliamentary exchanges and increased trade relations. The Pakistani minister also highlighted the importance of Saudi investments for Islamabad, particularly in the petrochemical, mining and minerals, and energy sectors.

He also hoped that the Road to Makkah Project, which allows Pakistani pilgrims at Islamabad Airport to have their customs and immigration process completed in the federal capital to save them time in Jeddah, would soon be extended to other cities of the country.

Perhaps hoping to overcome growing criticism over Saudi Arabia’s seeming support of India’s actions in Jammu and Kashmir, Prince Faisal and Qureshi discussed the role the Organization of Islamic Cooperation could play in advancing the plight of residents of India-held Kashmir. Saudi Arabia has stated that problems in Kashmir are an internal matter of India—while pushing ahead with investments of around $15 billion in India’s biggest oil company, Reliance, showing the same “vested interests” that P.M. Khan has railed against in his speeches condemning international inaction over Kashmir.

While thanking the Gulf kingdom for its support on Jammu and Kashmir in the OIC Contact Group, Qureshi briefed his Saudi counterpart on the ongoing lockdown of the region following New Delhi’s unilateral scrapping of its special autonomy on Aug. 5. He also highlighted the Indian government’s discriminatory actions against minorities, especially Muslims, through the Citizenship Amendment Act, 2019, and the National Register of Citizens.

P.M. Khan, too, urged the international community to help ensure the protection of minorities in India. He told Prince Faisal India’s belligerent actions along the restive Line of Control were stoking tensions and endangering regional peace and security. He also accused the Indian government of engaging in systematic efforts to marginalize and disenfranchise minorities, particularly Muslims.