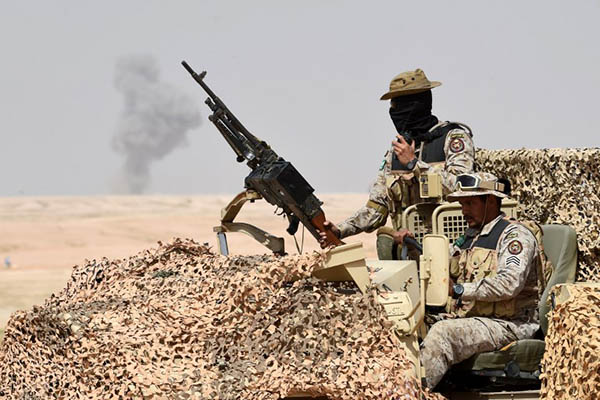 Saudi Arabia concluded a month-long military exercise involving more than two-dozen nations on Monday, a day after hosting an Arab summit that slammed what it called Iran’s growing interference in the region.

The exercise on Saudi Arabia’s east coast, dubbed Gulf Shield-1, involved combat search-and-rescue drills as well as naval warfare and air operations, officials said. Saudi King Salman presided over the closing ceremony of the drills, which he said highlighted a “unified alliance” between over 24 countries to combat military threats.

“The event is… meant to demonstrate our ability to take joint military action, the region’s readiness to support Arab unity and its capacity to deter any threats,” military spokesman Abdullah Subaei was quoted as saying in a Saudi information ministry statement. “This exercise demonstrates that we have the cooperation of friendly nations, our experience and expertise to deal with those threats.”

On Sunday, King Salman slammed Iran’s “blatant interference” in the region as Arab leaders met in the kingdom for their annual summit.

Riyadh and Shia rival Tehran back opposing sides in a range of hotspots across the mainly Sunni Muslim Middle East, including Lebanon, Syria, Iraq and Saudi Arabia’s southern neighbor, Yemen.

Saudi Arabia in March 2015 launched a coalition of Arab states fighting to roll back Iran-backed Houthi rebels in Yemen and restore the country’s internationally recognized government to power.