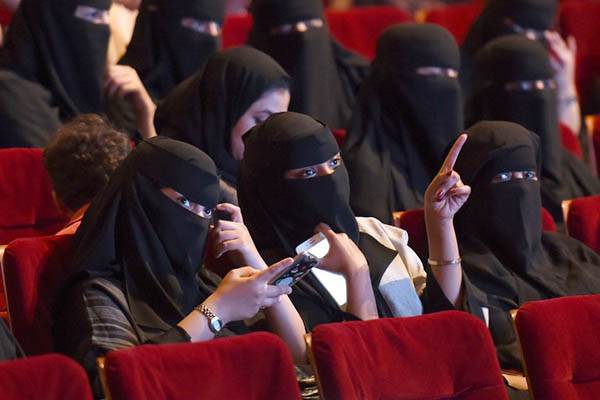 Saudi Arabia on Monday lifted a decades-long ban on cinemas, part of a series of social reforms by the powerful crown prince that are shaking up the ultra-conservative kingdom.

The government said it would begin licensing cinemas immediately and the first movie theaters are expected to open next March, in a decision that could boost the kingdom’s nascent film industry. Reviving cinemas would represent a paradigm shift in the kingdom, which is promoting entertainment as part of a sweeping reform plan for a post-oil era, despite opposition from hardliners who have long vilified movie theaters as vulgar and sinful.

“Commercial cinemas will be allowed to operate in the Kingdom as of early 2018, for the first time in more than 35 years,” the culture and information ministry said in a statement. “This marks a watershed moment in the development of the cultural economy in the kingdom,” the statement quoted Information Minister Awwad Alawwad as saying.

Saudi Arabia is expected to have more than 300 cinemas—with over 2,000 screens—all across the kingdom by 2030, the ministry said.

Like most public spaces in the kingdom, cinema halls are expected to be segregated by gender or have a separate section for families.

Hardliners, who see cinemas as a threat to cultural and religious identity, were instrumental in shutting them down in the 1980s.

Saudi Arabia’s highest-ranking cleric warned in January of the “depravity” of cinemas, saying they would corrupt morals. But authorities appear to be shrugging off the threat, with some comparing Saudi Arabia’s reform drive to a fast-moving bus—either people get on board or risk being left behind.

Saudis themselves appear quietly astounded by the torrid pace of social change, which includes the historic decision allowing women to drive from next June.

Saudi filmmakers have long argued that a ban on cinemas does not make sense in the age of YouTube. Saudi films have been making waves abroad, using the internet to circumvent distribution channels and sometimes the stern gaze of state censors.

“It is a beautiful day in #SaudiArabia!” Saudi female director Haifaa al-Mansour said on Twitter, reacting to Monday’s announcement. Her film Wadjda made history in 2013 after it became Saudi Arabia’s first Academy Award entry. The film depicts the dream of a 10-year-old girl to get a bicycle just like the boys in her conservative neighborhood.

This year, the country is again vying for an Oscar with the film Barakah Meets Barakah, the kingdom’s first romantic comedy which premiered at the Berlin International Film Festival. Without cinemas, filmmakers said investment in films was unlikely to flourish and the depiction of Saudi society would not move beyond the foreign portrayal of Saudis as extremist or culturally primitive.

“Now our young men and women will show the world possibilities and stories worth seeing,” Saudi filmmaker Aymen Tarek Jamal said on Twitter. “Congratulations to the 2030 Generation.”

The reform stems partly from an economic motive to boost domestic spending on entertainment as the kingdom reels from a protracted slump in oil prices.

Saudis splurge billions of dollars annually to see movie shows and visit amusement parks in neighboring tourist hubs like Dubai. “Opening cinemas will act as a catalyst for economic growth and diversification,” Alawwad said. “By developing the broader cultural sector we will create new employment and training opportunities, as well as enriching the kingdom’s entertainment options.”