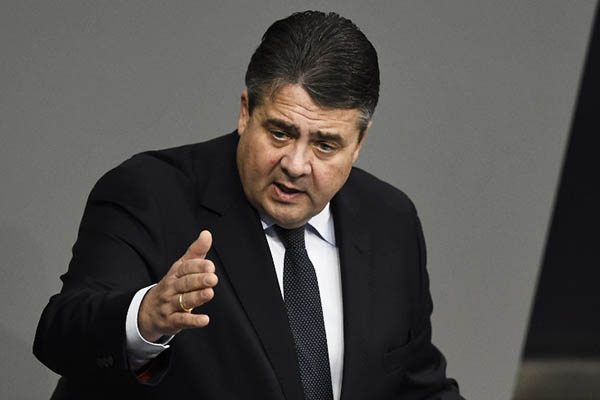 “From Saudi Arabia, Wahhabi mosques are financed throughout the world,” said Gabriel, referring to the austere version of Sunni Islam of 18th century preacher Sheikh Mohammed bin Abdul Wahhab, who co-founded the Saudi state. “In Germany many Islamists considered dangerous persons emerge from these communities,” he told the newspaper Bild am Sonntag.

Gabriel, who is Chancellor Angela Merkel’s deputy in a left-right coalition, warned against alienating Saudi Arabia, a crucial player in the bid to end the Syrian war, with too much criticism. “At the same time we must make it clear to the Saudis that the time of looking the other way is over,” said Gabriel, who is also economy minister.

The preaching associated with Wahhabi thought, including a return to Islam as practiced by the first generation of Muslims, has been accused of inspiring extremists from Osama bin Laden to the Islamic State group.

The head of the SPD parliamentary group, Thomas Oppermann, also urged steps against preaching that contradicts the basic freedoms guaranteed in the German constitution. “We will prevent Saudi help in the building or financing of mosques in Germany where Wahhabi ideas are to be disseminated,” he told the Welt am Sonntag newspaper.

Wahhabism provided the “complete ideology of the Islamic State and contributes in other countries to a radicalization of moderate Muslims,” he said, adding “this is something we don’t need and don’t want in Germany.”

The SPD leaders’ comments were published days after Merkel’s government was embarrassed by the release of a damning report on Saudi Arabia by its own foreign intelligence service, the BND. The report accused Saudi Arabia of an increasingly “impulsive” foreign policy with the goal of becoming the “leaders of the Arab world.”