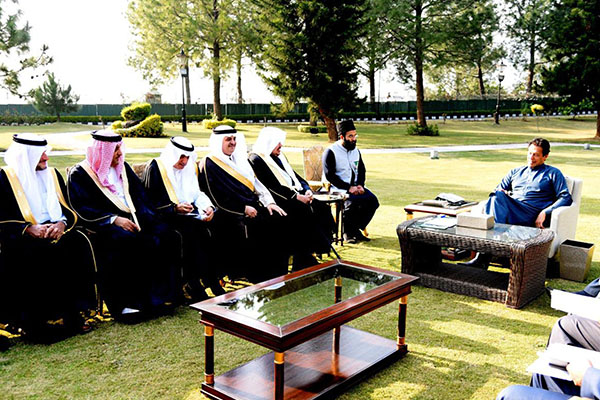 A delegation from Saudi Arabia visited Prime Minister Imran Khan in Islamabad, during which he updated the visitors on the ongoing humanitarian crisis in India-held Kashmir, detailing the communications blockade that has now gone on for over four months. Khan stressed that the world must recognize India’s egregious human rights violations in Jammu and Kashmir and utilize all possible efforts to alleviate the sufferings of Kashmiri people. The global community can help facilitate a peaceful resolution to the Kashmir dispute in accordance with U.N. Security Council Resolutions, he added.

During the meeting, the prime minister reiterated his government’s resolve to further deepen bilateral cooperation between Pakistan and Saudi Arabia in a wide range of fields. He said the Saudi leadership had always been held in high esteem in Pakistan, and a personal visit by Crown Prince Mohammed bin Salman earlier this year had further fortified this view. He also lauded the growing cooperation between the parliaments of the two nations.

The Shura Council of Saudi Arabia is a formal advisory body with no executive power. It has the authority to propose laws to the King of Saudi Arabia and his cabinet, who then determine whether or not to proceed with any legislation.

Al-Sheikh conveyed the greetings and best wishes of the Saudi leadership to P.M. Khan and expressed his commitment to continue working for closer and deeper links between the parliaments of Islamabad and Riyadh.