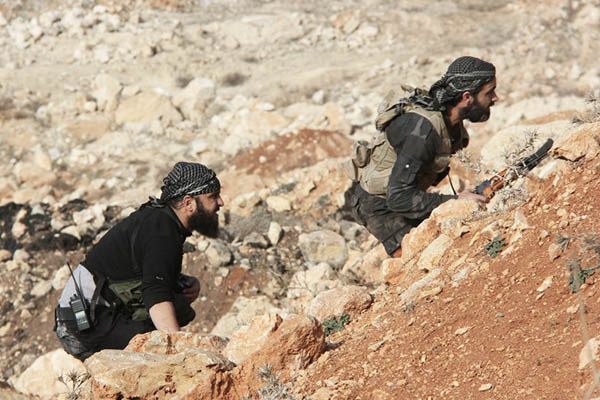 Recent visits between high profile officials of both countries were designed to discuss provision of anti-tank and anti-aircraft weapons for the rebels.

Saudi Arabia is in talks with Pakistan to provide anti-aircraft and anti-tank rockets to Syrian rebels to try to tip the balance in the war to overthrow President Bashar al-Assad, a Saudi source said Sunday.

The United States has long opposed arming the rebels with such weapons, fearing they might end up in the hands of extremists, but Syrian opposition figures say the failure of Geneva peace talks seems to have led Washington to soften its opposition.

Pakistan makes its own version of Chinese shoulder-launched anti-aircraft missiles, known as Anza, and anti-tank rockets—both of which Riyadh is trying to get for the rebels, said the source, who is close to Saudi decision-makers, requesting anonymity. The source pointed to a visit to Riyadh earlier this month by Pakistan Army chief of staff Gen. Raheel Sharif, who met Crown Prince Salman bin Abdul Aziz.

Prince Salman himself last week led a large delegation to Pakistan, shortly after Saudi’s chief diplomat Prince Saud al-Faisal visited the kingdom’s key ally. Jordan will be providing facilities to store the weapons before they are delivered to rebels within Syria, the same source said. AFP could not obtain confirmation from officials in Saudi, Pakistan or Jordan.

The head of the Syrian opposition, Ahmad Jarba, promised during a flying visit to northern Syria last week that “powerful arms will be arriving soon.”

“The United States could allow their allies provide the rebels with anti-aircraft and anti-tank weapons following the failure of Geneva talks and the renewed tension with Russia,” said the head of the Gulf Research Centre, Abdel Aziz al-Sager.

Providing those weapons to the rebels “relieves pressure on the U.S. in the short-term,” said Simon Henderson, director of the Gulf and Energy Policy Program at the Washington Institute for Near East Policy. “But the long-term political worry is that Manpads (Man-portable air-defense systems) will leak and be used to bring down a civilian airliner somewhere in the world.”

Rebels have long said that anti-aircraft rockets would help them defend themselves against Syrian warplanes, which regularly bomb rebel-held areas with barrels loaded with TNT and other ordinance.

The nearly three-year conflict in Syria has torn the country apart, killing more than 140,000 people, including some 50,000 civilians, according to the Britain-based Syrian Observatory for Human Rights.

Saudi Arabia has a strong influence on Syria’s southern front, where it coordinates with Jordan, and has helped unite the rebel fighters in the area, according to Syrian opposition sources. On the other hand, Qatar and Turkey are responsible for coordinating with the rebels on the northern front, said an official of the Syrian opposition, requesting anonymity.

Saudi Arabia has come to eclipse Qatar as the main supporter of the Syrian rebels, a development illustrated by the election last July of Ahmad Jarba, who has strong Saudi links, to lead the Syrian National Coalition, the main umbrella opposition group. The trend appeared to continue with the dismissal last week of Gen. Selim Idriss, the top commander of the Western-backed Free Syrian Army, who was considered close to Qatar, according to an opposition source.

The main criticism of Idriss was “bad distribution of weapons” and “errors in battle,” said another opposition source.

Idriss, who has refused his dismissal, has been replaced by Brig-Gen. Abdel Ilah al-Bashir, the leader of the rebel military council for the region of Quneitra in southern Syria. On its internal front, Saudi Arabia has sidelined intelligence chief Prince Bandar bin Sultan, who had been leading Riyadh’s efforts concerning Syria, according to a Western diplomat.

Diplomats have said that the file has been passed to the interior minister, Prince Mohammed bin Nayef, known for his successful crackdown on Al Qaeda following a wave of deadly attacks in the kingdom between 2003 and 2006. Bandar’s management had triggered American criticism, diplomats said.

The Saudi royal himself has reproached Washington for its decision not to intervene militarily in Syria, and for preventing its allies from providing rebels with much-needed weapons, diplomats added.