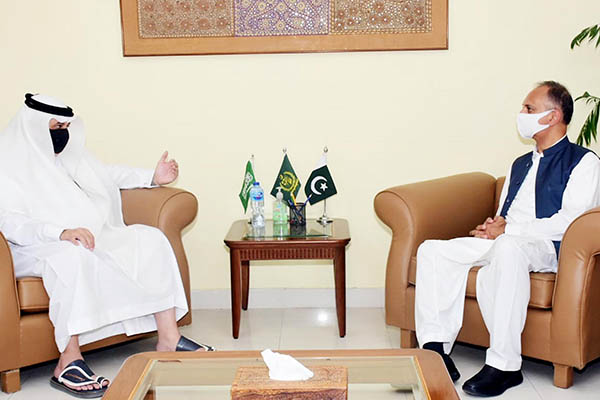 In meeting with Economic Affairs minister, Gulf kingdom’s ambassador says loan will be provided at concessional rate of 2 percent for 25 years

Ambassador of Saudi Arabia in Pakistan Nawaf bin Saeed Al-Maliki on Wednesday pledged that the Gulf kingdom will provide a loan of Rs. 37.4 billion to Pakistan for the construction of the Mohmand Dam.

“This dam will be constructed on Swat River in District Mohmand of Khyber-Pakhtunkhwa province and generate 800MW of electricity,” read an official statement issued after the meeting between al-Maliki and Economic Affairs Minister Omar Ayub Khan. It claimed that the dam would irrigate 16,000 acres of land and boost agriculture productivity in the region. “This dam will play a vital role in socioeconomic uplift of the province,” it said, adding that the minister had stressed that the dam’s construction would help improve the country’s energy security by increasing the share of hydroelectric power in the national energy mix. “Our government is focusing on environment-friendly and affordable energy through the development of solar, wind and hydel resources,” he said.

The Saudi envoy, according to the statement, said the loan would be provided at a concessional rate of 2 percent interest per annum for a period of 25 years.

The Saudi ambassador, read the statement, assured the minister of continued support at all levels to further strengthen economic cooperation between the two brotherly countries. He said that the Saudi side was committed to playing a much stronger role in the socioeconomic development of Pakistan. He also appreciated the role of Pakistani workers in the development of the kingdom.