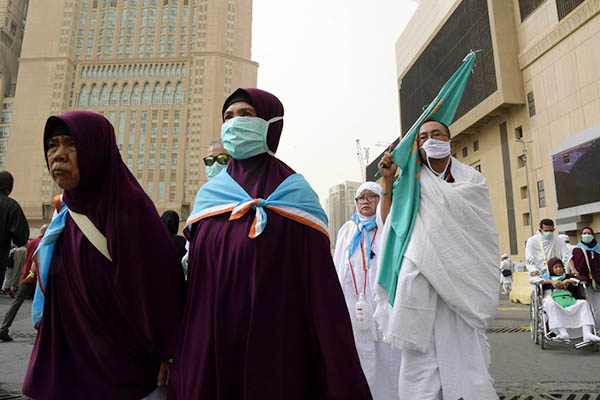 Saudi Arabia on Tuesday urged Muslims to hold off on making plans to participate in the annual Hajj pilgrimage, with a senior minister saying the Gulf kingdom was awaiting greater clarity on the deadly coronavirus pandemic.

Last month, Saudi Arabia suspended the Umrah pilgrimage over fears of COVID-19 spreading to Islam’s holiest cities, an unprecedented move that raised uncertainty over whether the annual Hajj would proceed this year. The Gulf kingdom has also restricted congregational prayers in a bid to curb the spread of the disease. Besides suspending Umrah, the Gulf kingdom has also halted all international passenger flights indefinitely and last week blocked entry and exit to several cities, including Makkah and Medina.

“We’ve asked the world not to rush with regards to Hajj groups until the path of the epidemic becomes clear, keeping in mind the safety of pilgrims and public health as a priority,” said Muhammad Salih bin Taher Banten, Saudi Arabia’s minister for Hajj and Umrah, in an appearance on state TV. “We have coordinated with the Ministry of Health an inspection tour of hotels that were used for health isolation to ensure that all services and care are provided to pilgrims,” he added.

Some 2.5 million pilgrims flock to Makkah and Medina each year for the weeklong Hajj ritual, which is a duty all able-bodied Muslims are required to fulfill at least once in their life. The pilgrimage is a major source of income for the kingdom and attracts Muslims from across the world.

To date, the kingdom has reported just over 1,500 confirmed coronavirus cases and 10 deaths. Globally, more than 825,000 people have been infected with over 40,000 deaths recorded since the coronavirus originated in China’s Wuhan city late last year.

Last week, the Saudi government had asked Pakistan to defer signing any agreements related to the upcoming Hajj due to the uncertainty arising from the coronavirus pandemic. “We are closely monitoring the coronavirus situation and will inform you as soon as it gets better,” Banten had said in a letter addressed to Religious Affairs Minister Noorul Haq Qadri.

Last month, the Ministry of Religious Affairs had selected 86,765 intending pilgrims through general balloting out of 149,295 applicants.