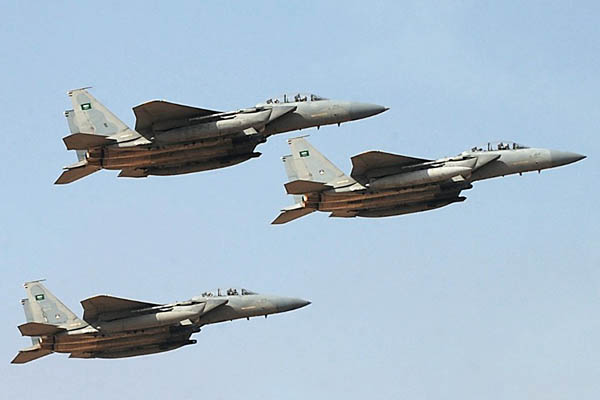 The Gulf kingdom’s airstrikes on Houthi rebels in Yemen is not the first time it has ‘policed’ the Middle East.

Regional power Saudi Arabia, which launched airstrikes Thursday on Houthi rebels in Yemen, has intervened militarily in the region several times in the past. Below is a timeline of its most notable involvements.

Riyadh announces that it has sent aircraft, armored vehicles and large quantities of weapons and ammunition, as well as a detachment of paratroopers, to help Jordanian forces fight Israel.

Between 1,000 and 2,000 Saudi soldiers based in Jordan since the Six-Day War fight alongside Syrians against Israel on the Golan Heights. On Oct. 16, Riyadh and other oil producers use the commodity as a weapon by steeply increasing the price of crude. The Saudi troops remain deployed on the Golan Heights until withdrawing on Oct. 4, 1976.

Riyadh, a member of the international coalition to drive Iraq from Kuwait, which it invaded in August 1990, plays a key role in the Gulf war by putting its territory and military bases at the coalition’s disposal.

After Shia rebels killed a Saudi border guard, Riyadh carried out a three-month-long intervention to stop them infiltrating. The Saudi authorities say the attacks are confined to its territory, while the rebels accuse it of bombarding Yemeni territory.

In January 2010, amid a ceasefire between the rebels and Sanaa, Saudi Arabia says 109 Saudi soldiers were killed during the operation, the biggest carried out by Riyadh since it took part in the Gulf War.

More than 1,000 Saudi soldiers intervene alongside security forces from the United Arab Emirates to help Bahrain’s Sunni Muslim monarchy crack down on Shia-led opposition protesters in the midst of the Arab Spring.

Riyadh confirms that it has taken part in the first airstrikes carried out in Syria by the U.S.-led coalition against jihadists from the Islamic State group, who have seized swathes of territory in Iraq and Syria.