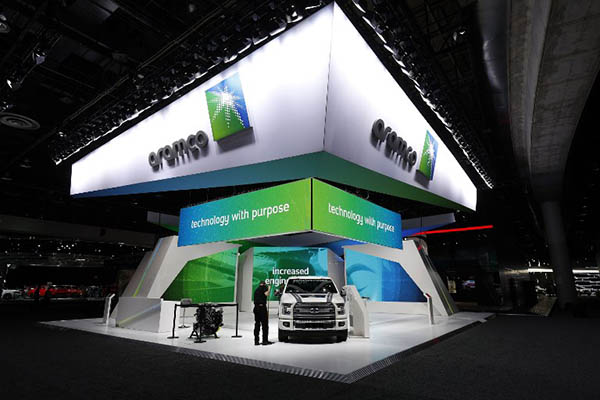 Oil giant Saudi Aramco revealed on Monday it made the world’s biggest corporate profit last year, opening its secretive accounts for the first time as it prepares to raise funds from investors.

International ratings agencies Fitch and Moody’s got rare access to Aramco’s accounts, which show the firm posting billions in profits. It comes as Aramco prepares to sell bonds on the international market to help finance the purchase of a 70-percent stake in Saudi petrochemical behemoth SABIC for $69.1 billion, effectively merging the kingdom’s two largest companies.

However, both Fitch and Moody’s gave state-owned Aramco a credit rating of just A+ and A1 respectively, with a stable outlook, since the majority of its revenue is taken by the government to finance its ever-increasing spending. Based on its finances, massive hydrocarbon reserves and low production cost, its stand-alone rating would have been a top AA+ on an equal footing with international oil companies, Fitch said.

“Saudi Aramco has many characteristics of a Aaa-rated corporate [top rating], with minimal debt relative to cash flows, large scale of production, market leadership and access in Saudi Arabia to one of the world’s largest hydrocarbon reserves,” said Rehan Akbar, vice president at Moody’s.

The first-ever ratings for Aramco come as it prepares to sell bonds to finance the purchase announced last week of a majority stake in SABIC. “International bond issuance by Aramco would be a landmark event,” M.R. Raghu, research head at the Kuwait Financial Center, said. It would help test investor interest and appetite before the potential listing of the firm, Raghu told AFP.

The SABIC deal follows long delays in a proposed sale of Aramco shares to raise up to $100 billion to finance Prince Mohammed’s Vision 2030 reform program.

The murder of Saudi journalist Jamal Khashoggi inside the kingdom’s Istanbul consulate last year, coupled with a sweeping crackdown against dissent, unnerved many investors.

Fitch said that based on information received from Aramco, the planned sale of up to five percent of Aramco through an initial public offering (IPO) still stands and is likely to take place in 2021. Saudi Arabia already has around $500 billion of assets managed by its central bank. But even so, the SABIC deal will give the Public Investment Fund, one of the kingdom’s sovereign wealth funds, much-needed cash to carry out Vision 2030.

The PIF, which aims to control more than $2 trillion by 2030, is leading efforts to transform the petro-state to a tech-focused economy. The fund has major global investments including a stake in ride-hailing app Uber.

Moody’s said that considering Aramco has a substantial cash flow generation capacity, it could fund the SABIC deal without the need to borrow. “This acquisition will strengthen the company’s business profile given that downstream assets typically provide countercyclical cash flow benefits,” it said in reference to the volatility of oil prices.