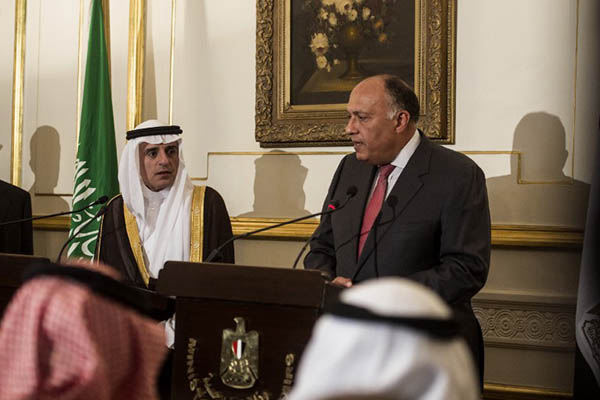 Saudi Arabia and Egypt said Sunday they shared a “common vision” on the war in Yemen, where a Riyadh-led coalition is waging a bombing campaign against Iran-backed rebels.

The coalition, which includes Egypt, began air raids in March targeting Houthi Shia rebels and allied forces loyal to ousted president Ali Abdullah Saleh in Yemen. “We have a common vision on how to deal with the situation in Yemen,” said Egyptian Foreign Minister Sameh Shoukri at a joint press conference with his visiting Saudi counterpart Adel al-Jubeir. “Our positions are identical, the work is done through close co-ordination at all levels,” he said.

While Egyptian media supported Cairo’s February airstrikes inside Libya targeting the Islamic State group, it has been more critical of Egypt’s role in the Yemeni air war.

Iran has repeatedly denied providing support to Houthis and their allies who overran much of Yemen earlier this year. It has called for an end to the bombing campaign and the opening of a political dialogue.

“We reject the actions of Iran… and Iran’s support for terrorism,” said Jubeir, who is on his first visit to Egypt since becoming foreign minister. Iran “is the only state that interferes in the affairs of the region, whether in Lebanon or Syria or Iraq or Yemen,” he added.

Jubeir said Riyadh and Cairo wanted to build relations with Tehran, but it “depends on Iran’s behavior.”

Jubeir’s visit to Cairo came after the U.N. envoy for Yemen, Ismail Ould Cheikh Ahmed, began on Saturday a mission to discuss stalled peace talks. A peace conference due to take place on May 28 in Geneva was postponed, in a fresh blow to U.N. efforts to end a conflict estimated to have killed almost 2,000 people.