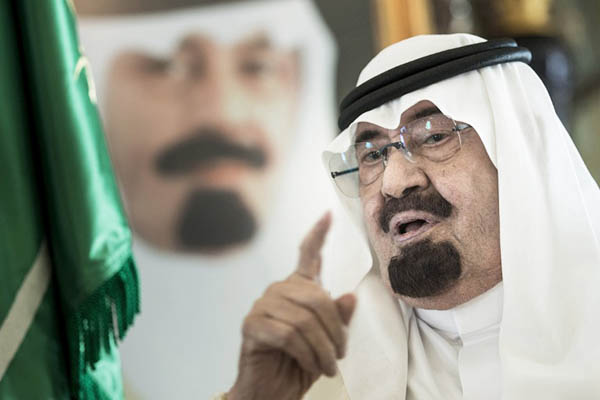 The former leader has been hailed as a patient reformer who battled hardliners.

Saudi King Abdullah was in his early 80s when he ascended the throne in 2005 but he sprang into action in a campaign to free the kingdom from dependence on oil and the influence of hardline Islamists.

Tapping into the absolute monarchy’s massive oil wealth, Abdullah, who died Friday aged around 90, launched projects to build new economic cities, universities and high-speed railways. He tried to convert the country from a breeding ground for Islamic radicals into a moderate, constructive partner in global politics.

In 2011, Abdullah withstood the convulsions of the Arab Spring uprisings that ousted several leaders in the region, splashing out from vast surpluses of cash to try to keep people content. More recently, Saudi Arabia has been among several Gulf countries taking part in a U.S.-led air campaign against the Islamic State jihadist group in Syria. His nation also unflinchingly led Gulf countries in ignoring calls by other producers to cut oil output to curb the sliding price of crude.

But over the years, Abdullah’s age and commitment to consensus allowed entrenched conservatives to resist his reforms, amid a lack of clarity about the future path of the monarchy.

Since the death in 1953 of King Abdul Aziz bin Saud, the founder of Saudi Arabia, the throne has systematically passed from one of his sons to another—brothers and half-brothers. But many of Abdul Aziz’s sons are dead or aged. Two crown princes, Sultan and Nayef, died in 2011 and 2012.

Abdullah’s half-brother Salman, the crown prince who was named king in a royal statement on Friday, is in his late 70s and in poor health.

In March 2014, Abdullah named another half-brother, Prince Moqren, as a second heir to his throne, in an unprecedented move aimed at ensuring a smooth succession. The royal statement on Friday named Moqren, the youngest of Abdul Aziz’s sons, the new crown prince.

Abdullah established the Board of Succession in 2006 to institutionalize the process of transition, which would normally exercise its prerogatives after his death. Unstained by the profligacy tainting many of the Saudi rulers, Abdullah was hugely popular with his subjects, cherishing the traditional desert life of the Bedouin.

Behind his thick, always jet-black moustache and goatee and gentle demeanor, he had a shrewd grasp of regional politics. He was the 13th son of King Abdul Aziz, but the only son of Abdul Aziz by his mother, a member of the Shammar Bedouin tribe. That left Abdullah with a relatively weak faction among the many princes of his generation.

In the 1960s he was entrusted with the command of the national guard, the country’s second army. He held that job until turning it over to one of his own sons in 2009. The job allowed him to build close relations with the kingdom’s myriad tribes who filled the guard’s ranks, one of the main pillars of his authority.

Abdullah became crown prince when his half-brother Fahd ascended the throne in 1982. Yet his path was still not clear when Fahd suffered a debilitating stroke in 1995, and he faced rivalry from within Fahd’s Sudairy clan.

Since the late 1990s, Abdullah fostered important changes. He developed the consultative Shura council, strengthened the country’s finances and began modernizing the unwieldy sharia-based legal system. He took Saudi Arabia into the G20 group of leading economies and the World Trade Organization.

And he challenged conservatives by supporting progressive clerics, creating human rights organizations and launching a science university that, for the first time, permitted men and women students to mix freely.

Nevertheless, his kingdom is still strongly criticized for a dismal human rights record, including the imprisonment of dissidents. Saudi Arabia is the only country in the world that does not allow women to drive. Women are required to dress in black from head to toe and still need permission from a male guardian to work and marry.

Saudi Arabia has stepped up its use of the death penalty, usually by beheading, despite repeated appeals from the United Nations and human rights watchdogs.

Abdullah led the nation’s grudging response to Islamic extremism after the September 11, 2001 attacks on the United States, which bared Al Qaeda’s deep roots inside Saudi Arabia. Although he expressed opposition, he permitted the U.S. military to use Saudi facilities and bases for the invasion of Iraq, but only for logistical support.

In 2002 he parented the path-breaking Arab Peace Initiative, which offered Israel blanket recognition from 22 Arab states in return for an independent state for the Palestinians. In public he has been a committed supporter of diplomacy to solve conflicts, calling for a peaceful solution to Iran’s nuclear threat.

But U.S. State Department documents disclosed by WikiLeaks quoted him as privately calling for a U.S. military attack on Iran’s nuclear facilities to “cut off the head of the snake.”