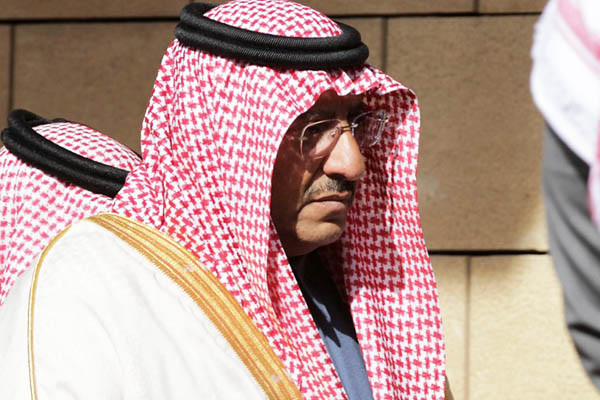 Saudi Arabia’s King Salman on Wednesday named his powerful interior minister as heir in a generational shift that also saw one of his sons promoted to second in line to the throne.

A royal decree removed Crown Prince Moqren bin Abdul Aziz bin Saud, 69, as heir and replaced him with Prince Mohammed bin Nayef, 55, who led a crackdown on Al Qaeda in the oil-rich kingdom a decade ago. Riyadh also changed its foreign minister in the second major government shakeup since King Salman inherited power in January.

The announcement comes a day after Saudi Arabia said it arrested 93 jihadists since the end of 2014, most of them linked to the Islamic State group, and had foiled several plots to carry out attacks across the kingdom.

Accentuating the move to a more youthful leadership, Salman, 79, also promoted one of his sons, Mohammed bin Salman, to be deputy crown prince. Mohammed bin Salman, in his early 30s, retains the position of defense minister, in which he has overseen more than a month of airstrikes against Iran-backed rebels in neighboring Yemen.

Saudi Arabia’s envoy to the United States, Adel al-Jubeir, 53, was appointed foreign minister. He replaces Prince Saud al-Faisal who was born in 1940 and “asked to be relieved from his duties due to his health condition,” said a royal decree carried by the official Saudi Press Agency.

The dismissal of Moqren removes one of the few remaining high-level officials from the era of King Abdullah, who died on Jan. 23 and was replaced by Salman, 79. Moqren would have been the last son of the kingdom’s founder, Abdul Aziz bin Saud, to rule the country established in 1932.

It was the first time a crown prince was relieved of his duty in the kingdom’s history. Moqren’s removal leaves Mohammed bin Nayef as the first of the second generation, or grandsons of Abdul Aziz, in line to lead the conservative Islamic kingdom.

Mohammed bin Nayef’s appointment further solidifies control of Salman’s Sudayri branch of the royal family. Their influence had waned under Abdullah. Moqren had no ministerial portfolio and his replacement is not much of a surprise, the diplomatic source said.

The royal decree said that Mohammed bin Salman was named deputy crown prince after proving he possessed “massive capabilities.” But the reshuffle removed him from one key position, head of the royal court, a move seen by the diplomatic source as pragmatic.

“He can’t do everything,” the source said, noting that Mohammed bin Salman is the only official to sit on two high-level coordinating bodies, one for security and one for the economy.

A statement from the royal court, carried by the SPA, said the removal of Moqren was a response to “what he had expressed about his desire to be relieved from the position of crown prince.” It added that Moqren was also replaced as deputy prime minister in the world’s largest oil exporter, but it insisted “he will always remain in high regard.”

The decree named Mohammed bin Nayef as deputy prime minister and said he will continue in his position of interior minister and head of the political and security council, a coordinating body.

Under Salman, Sunni-dominated Saudi Arabia has adopted a more assertive foreign policy, leading the coalition targeting Shia rebels in Yemen since late March. The appointment of Jubeir, who came to attention answering reporters’ questions in the United States in defense of his country’s actions, as foreign minister is unusual as he is not a member of the ruling family.

Prince Saud had held the post since 1975, making him the world’s longest-serving foreign minister. He was in the United States for back surgery when Salman acceded to the throne.

A royal decree said he has now been appointed as an adviser and a special envoy of the king, as well as a supervisor on foreign affairs.

Salman also named Khalid al-Falih, the head of oil giant Saudi Aramco, as health minister. According to the company’s website, Falih has been the oil company’s president and CEO since 2009.

Ali al-Naimi retained his position as the OPEC kingpin’s oil minister, which he has held for 20 years. Minister of Labour Adel Fakieh was moved to the post of economy and planning, as the kingdom seeks to diversify its oil-based economy.