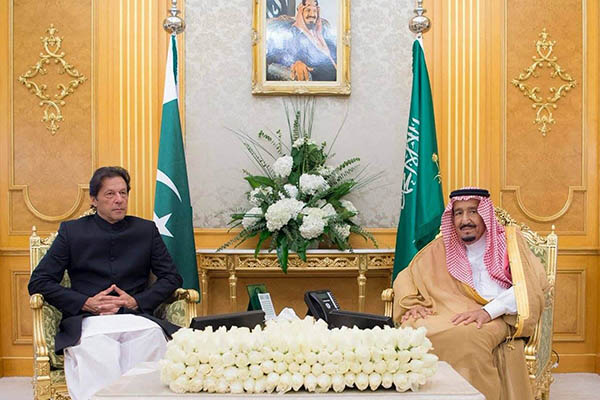 Khan also met Crown Prince Mohammed bin Salman and energy minister Khalid al-Falih as he concluded his two-day visit, the Saudi Press Agency said, amid speculation that he would seek economic assistance from the oil-rich ally.

“Anyone who comes to power in Pakistan will visit Saudi Arabia first,” Khan told Saudi-owned Al-Arabiya television during his visit to Jeddah. “Saudi Arabia has in the past helped Pakistan when Pakistan has been in need,” he added.

Former cricket great Khan, who assumed office one month ago, faces challenges including a faltering economy, militant extremism, water shortages and a rapidly growing population. The most pressing is a looming balance-of-payments crisis, with analysts predicting Pakistan will have to go to the International Monetary Fund for a fresh bailout.

The IMF has bailed Pakistan out repeatedly since the late 1980s. The last time was in 2013, when Islamabad got a $6.6 billion loan to tackle a similar crisis.

Pakistani media has speculated that Khan is eyeing Saudi Arabia and China to provide loans to rescue Islamabad from the crisis and stave off another IMF bailout.

Khan was accompanied to Jeddah by Foreign Minister Shah Mehmood Qureshi and Finance Minister Asad Umar, who met his Saudi counterpart Mohammed al-Jadaan. The two finance ministers spoke about “financial and economic cooperation” between the two countries, SPA said in a brief statement.

Khan is also due to visit the United Arab Emirates following his Saudi visit.

His tour of the Gulf comes as the Islamabad High Court on Wednesday ordered the release of his political rival, former prime minister Nawaz Sharif and his daughter, suspending their prison sentences for corruption pending an appeal hearing.