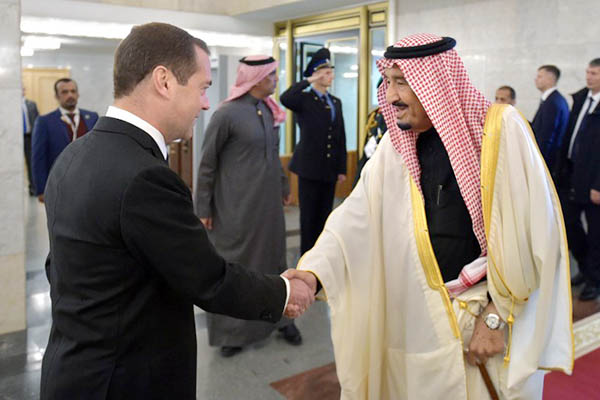 Despite differences over Syria war, Riyadh and Moscow are striking slew of arms, energy deals

Saudi King Salman swept into Moscow with a vast entourage for a first ever visit that underscored Russia’s growing power in the Middle East, despite deep differences between the two oil giants over Syria.

The Saudi king brought 1,500 people to Moscow and had a plane fly in fresh food supplies from Riyadh every day during his four-day visit last week, the first by a Saudi monarch. President Vladimir Putin welcomed the king in a lavish Kremlin ceremony and Moscow was covered in billboards greeting the monarch in both Arabic and Russian.

The world’s largest energy exporters did not let the fact they have for decades been at loggerheads over conflicts in the Muslim world, from Afghanistan to Chechnya, prevent them from striking a slew of arms and energy deals worth billions of dollars.

Yet the two oil producers find themselves backing opposite sides of the Syrian civil war.

Saudi Arabia supports the Syrian rebels fighting Bashar al-Assad, while Moscow has teamed up with Riyadh’s nemesis Iran to save the Damascus regime. While the Saudis blame Assad for a conflict that has left over 330,000 dead since 2011, the visit was a sign that Riyadh has come to terms with the major role Russia now plays in the Middle East.

“For Putin, the king’s visit showed that he acknowledges this role,” Alexander Shumilin of the Middle East Conflicts Center in Moscow told AFP.

Moscow’s air campaign in Syria, launched in 2015, was widely seen as a game changer in the conflict that—at least for now—appears to have secured Assad’s grip over his war-torn country. Now, the Kremlin is seeking support for a political settlement in Syria that guarantees Assad’s role.

Saudi Arabia has sought to diversify its global relationships since Washington has reduced its role in the region. “America has become less interested in the Middle East and Russia is taking advantage of that,” says Fyodor Lukyanov, of the Council on Foreign and Defense Policy in Moscow.

Saudi Arabia’s grievances with Washington date back to the Barack Obama era. Like other U.S. allies in the region, Riyadh wanted regime change in Damascus and became disillusioned when Obama refused to take decisive action against Assad.

“America discredited itself, and Russia is coming out of a long period of stagnation,” says pro-Kremlin analyst Alexander Filonik of the Russian Academy of Sciences. Moscow could also act as a convenient partner in supporting change inside the Saudi regime.

While Russia will not replace Washington as the region’s primary security provider, Frolov says, the Saudis could look to Moscow as a more reliable ally in case of an Arab Spring-inspired popular uprising. “They saw the U.S. betray their ally Hosni Mubarak in Egypt in the name of promoting democracy,” says Frolov.

For the Saudis, the visit to Moscow was also an attempt to sway Putin to use his position to diminish Iranian influence in the Middle East. “For Saudi Arabia, not letting Iran get stronger in the region is a priority,” says Shumilin. “Nobody knows how Putin will act on this, he is in the middle of major players heading in different directions,” he adds.

Frolov suggests Russia is too dependent on Iranian boots on the ground in Syria to afford a serious rupture with Tehran. “The Saudis will be disappointed with Putin on this and it might affect their economic deals with Russia,” he says.

Despite their clear differences, Salman’s visit confirmed the Kremlin’s military campaign in Syria has secured its long-term role as a serious player in the Middle East.