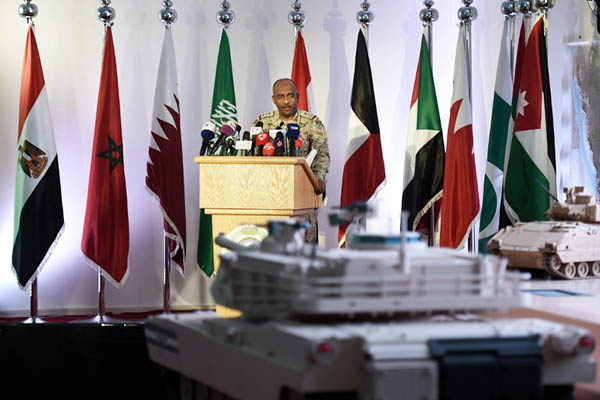 Coalition forces claim Yemeni rebels have continued to violate ceasefire since it was declared last month.

A Saudi-led coalition battling Iran-backed rebels in Yemen announced the end Saturday of a ceasefire that had been violated on a daily basis since it was declared last month.

The “coalition leadership announces the end of the truce in Yemen starting from 1400” on Saturday, the alliance said in a statement carried by the official Saudi Press Agency. The ceasefire announced on Dec. 15 had been ended due to continuous rebel “attacks on the kingdom’s territories by firing ballistic missiles towards Saudi cities, targeting Saudi border posts, and hampering aid operations,” it said. The rebels have also “continued to shell residents and kill and detain Yemeni civilians in cities under their control,” said the coalition. “All this shows how unserious the militias and their allies are and their disregard for the lives of civilians, and how they have clearly exploited this truce to make gains.”

However, the coalition “was and is still eager on creating the suitable circumstances to find a peaceful solution in Yemen,” it said.

Saudi Arabia is leading a military coalition that has been battling Iran-backed rebels in neighboring Yemen since March.

The rebels intensified their rocket attacks across the Saudi border in recent days, prompting the coalition to threaten severe reprisals.

The statement comes after the coalition announced that Saudi air defense forces had intercepted a ballistic missile fired from Yemen toward the kingdom’s city of Abha late on Friday. The “launcher was located and destroyed in Yemen,” it said.

The Saudis have deployed Patriot missile batteries designed to counter attacks and have recently been intercepting missiles fired from Yemen on an almost-daily basis. More than 80 people, most of them soldiers and border guards, have been killed in shelling and cross-border skirmishes in the kingdom’s south since coalition operations began in Yemen.

On Thursday, three civilians including two children were killed in cross-border missile attacks from Yemen on a residential area in the Jazan region of Saudi Arabia. Eleven others were wounded, among them nine children, according to Saudi civil defense.

In Yemen itself, nearly 6,000 people have been killed since March, according to U.N. figures.

On Saturday, the coalition carried out airstrikes on different parts on the country, including Sanaa province, military sources said. Clashes meanwhile raged between pro-government forces and rebels across the impoverished nation causing casualties on both sides, the sources said, without giving a toll.

Rebels also fired mortars at residential areas in the besieged city of Taez, where civilians have been suffering from a shortage in food and medical supplies, military sources there said.

Fighting has escalated in Yemen since the coalition entered the war to support President Abedrabbo Mansour Hadi’s internationally recognized government in March. The U.N. Security Council last month urged Yemen’s warring parties to respect the ceasefire and to resume their inconclusive peace talks. The truce was declared as talks between the government and rebel representatives opened in Switzerland, and it was later extended by a week.

But the fighting never stopped on the ground and coalition airstrikes continued, while the talks ended with no major breakthrough six days after they had started, with both sides saying they would meet again in January.

In May, a five-day pause in fighting proposed by Saudi Arabia allowed some aid into Yemen before the coalition resumed airstrikes, blaming the rebels and their allies for violating the ceasefire.

The rebels seized Sanaa in September 2014 and then advanced south to second city Aden, forcing Hadi to flee last year to Saudi Arabia. Following territorial gains by loyalists, Hadi returned to Aden in November after six months in exile.