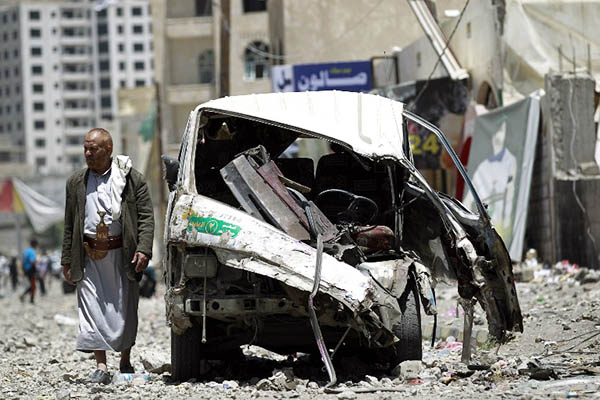 First phase of operations has ended, but alliance has vowed to continue targeted bombing when necessary.

Saudi-led coalition warplanes launched new strikes in Yemen on Thursday despite a demand by rebels for a complete halt to the raids as a condition for U.N.-sponsored peace talks.

The regional alliance on Tuesday declared an end to the first phase of its operations against the Iran-backed Houthi rebels but vowed to keep hitting them with targeted bombing when necessary.

Saudi Arabia and its Arab allies launched the air war on March 26 in an attempt to restore the authority of President Abedrabbo Mansour Hadi, who was forced to flee abroad last month as the rebels swept across the country. After the end of Operation Decisive Storm, the coalition said the campaign would enter a second phase called Operation Renewal of Hope focusing on resuming political talks, aid deliveries and “fighting terrorism.”

“The Houthis should be under no illusion that we will use force in order to stop them taking over Yemen by aggressive actions. So that will not change,” Saudi ambassador Adel al-Jubeir told reporters in Washington on Wednesday.

The alliance said it had destroyed the rebels’ missile and air capabilities, but the Houthis and their allies still control the capital Sanaa and swathes of the country while Hadi remains in self-exile in Riyadh.

The Shia rebels on Wednesday called for a complete halt to the air raids so warring parties could return to the negotiating table. “We demand, after a complete end to the aggression against Yemen and the lifting of the blockade, to resume political dialogue… under the sponsorship of the United Nations,” said spokesman Mohammed Abdulsalam.

The new air raids overnight hit rebel positions close to Sanaa, around the third city Taez, and in the central town of Yarim, according to witnesses.

Residents said there were also strikes in the southern province of Lahj as well as near the main southern city of Aden, where clashes between rebels and fighters loyal to Hadi raged on.

Abdulkhaleq Abdulla, political science professor at the University of the Emirates, said the conditions for an effective ceasefire had not yet been met. “The war is not over,” he said. At the same time, “there are several attempts to find a political solution.”

On Wednesday, the coalition had launched new raids on Houthis who overran a major base of pro-Hadi troops in Taez, where further strikes were reported overnight. Northeast of Sanaa, the raids targeted positions held by the Houthis as well as rebel troops loyal to former president Ali Abdullah Saleh. And in Yarim, warplanes hit an old university building used as a headquarters by the rebels, residents said.

A newly announced division of the Islamic State jihadist group also claimed a bombing in Yarim that it said had killed five Shia rebels. In a message on Twitter, the “Green Brigade” said it had struck a Houthi vehicle on Wednesday.

I.S. claimed its first attack in Yemen on March 20—multiple suicide bombings targeting Houthis at Shia mosques in Sanaa that killed 142 people and wounded more than 350. Al Qaeda has traditionally been the dominant jihadist group in Yemen and has exploited the growing turmoil to expand its territory in the largely lawless southeast.

The World Health Organization says that at least 944 people have been killed in Yemen since March 19. U.N. Secretary General Ban Ki-moon appealed for an end to the fighting and offered the “diplomatic facilities through which we can resolve this issue through dialogue.”

The U.N. had sponsored a Gulf-brokered peace deal that eased former president Ali Abdullah Saleh out of office in 2012, ending a year of bloody protests against his three-decade rule. Ban said he had proposed a successor to U.N. envoy Jamal Benomar, who resigned last week after reportedly losing support among Gulf countries.

The Red Cross warned of a “catastrophic” humanitarian situation, with fuel supplies reaching “zero levels” and an acute shortage of food leading to soaring prices. Human Rights Watch said a coalition airstrike on a warehouse of the aid group Oxfam on April 18 in the northern rebel stronghold of Saada appeared to have violated the laws of war. “The fact that the Oxfam warehouse should have been known to the coalition forces raises concerns that the attack was deliberate,” the New York-based watchdog said in a statement. The coalition has not commented on the incident.