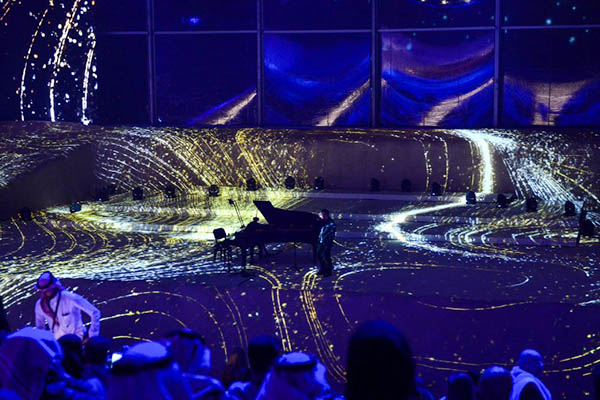 Bathed in light, musicians belt out melodies among pre-Islamic desert ruins in northwestern Saudi Arabia, a heritage trove at the center of efforts to put the reclusive kingdom on the tourism map.

Hosted by the Al-Ula governorate—where Nabatean tombs and art are chiseled into caramel-hued rock—“Winter at Tantora” is the latest music carnival in the Islamic kingdom, where such events were unheard of just two years ago.

Spread over eight weekends until Feb. 9, the main events are hosted in an auditorium made of mirrored glass that has drawn international artists, from Lebanese singer Majida El Roumi to French classical violinist Renaud Capucon. And it shines a spotlight on a long-isolated area seen widely as an open-air museum.

The festival is seen as a soft opening of Al-Ula, an area roughly the size of Belgium that is being touted as the centerpiece of Saudi attractions, as the conservative petro-state prepares to open up to international tourists.

Building a tourism industry from scratch is at the heart of a government plan to prepare the Arab world’s biggest economy for a post-oil era, an ambition fraught with challenges. The austere kingdom, which forbids alcohol and has a strict social code, is already seen by many as a hard sell for tourists.

Recent events that drew international censure—notably the gruesome murder last year of critic Jamal Khashoggi and a sweeping crackdown on dissent—appear to have made the challenge more acute. “Saudi has great tourism potential, but after what happened it’s hard to come here and say ‘Everything is wow, everything is amazing,’” said a Westerner who was among a group of global social media influencers invited by the kingdom for an all-expenses-paid trip to Al-Ula. “When I went to collect my [Saudi] visa, my friends joked: ‘Hope you return alive!.’”

The Oct. 2 murder of Khashoggi, whose body was dismembered by a team of Saudi agents inside the kingdom’s Istanbul consulate, triggered global outrage. If Al-Ula were in another country, it would be an easier sell, others in the group suggested. “The biggest obstacle is stereotypes,” said Kyle Mijlof, a 30-year-old travel photographer from Cape Town.

A liberalization drive by Crown Prince Mohammed bin Salman, known as MBS, has brought new cinemas, concerts and sporting extravaganzas. While it is yet to offer tourist visas, the country fast-tracked electronic permits for visitors to attend the festival.

The kingdom organized a similar process in December for a motorsports event in Riyadh, where performances by artists like Enrique Iglesias and David Guetta—and thumping after-parties—were on offer.

“We live in a Saudi Arabia where by day children may be told that music is forbidden but by night they are taken to music concerts,” said a Saudi artist, highlighting a social dichotomy.

In a country where two-thirds of the population is under 30, ramping up entertainment that allows citizens to have fun aims ostensibly to blunt public frustration over an economic downturn and soaring youth unemployment. “MBS may have borrowed from the playbook of the ancient Roman empire, which hoped ‘panem et circenses’—bread and games—would be enough to make citizens acquiescent,” said Cinzia Bianco, a Middle East analyst at Gulf State Analytics. “The belief is that if they are engrossed in worries about making money and having fun, they will have no interest in politics and dissent.”

Preparations for the Al-Ula festival “accelerated” after the Khashoggi crisis erupted, as authorities have been keen to turn the page on his murder, a Western consultant close to the organizers said on condition of anonymity. An official close to the organizers denied that it was a diversionary tactic, saying planning for the festival was in the works well before the murder.

Saudi Arabia is seeking to preserve heritage sites that predate the life of Islam’s Prophet life in the seventh century. The sites have long been neglected or vandalized, because glorifying them is considered blasphemous by religious conservatives.

With French support in Al-Ula, archaeological teams are undertaking a massive survey of key sites, which includes scanning via helicopters, satellites, drones and a remote sensing technology called Lidar.

Five-star resorts are being planned to accommodate thousands of tourists. Local residents are being trained as guides, offering them some respite from rampant joblessness.

Al-Ula is expected to fully open up to foreign tourists within three to five years, an official from the Royal Al-Ula Commission said. He added that the project aims to revive the glory of Saudi Arabia’s ancient past, a topic that has scant coverage in local history textbooks. “For years we were stereotyped as people who have pools of petrol in their backyards,” the official said. “We are changing that narrative. This [project] is about national pride.”