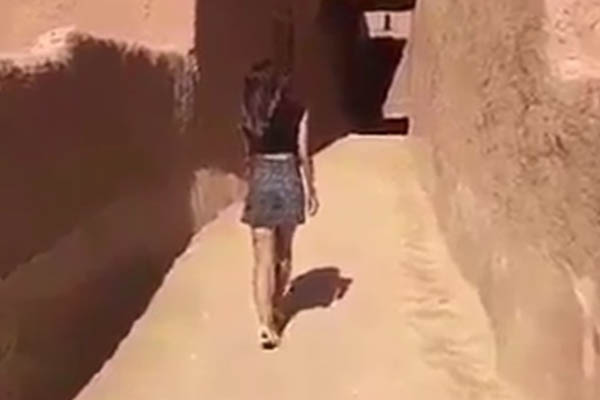 Saudi police said on Tuesday they were questioning a woman who appeared in an online video in a miniskirt and crop top walking through a historic site in the ultraconservative kingdom.

A series of videos, initially posted over the weekend to the Snapchat account of “Model Khulood,” show a young woman in a high-waisted miniskirt walking through a fort in Ushaiqer, outside the capital Riyadh, playing with sand in the dunes and turning towards the camera for a close-up, her long hair uncovered.

The videos have since been uploaded to YouTube and tweeted by different users.

Saudi media, including the main dailies Sabq and Okaz, on Tuesday quoted a spokesman for police in Riyadh as saying the woman was being questioned and had confessed to visiting the site with her male guardian.

Saudi Arabia’s guardianship system mandates accompaniment by or written permission from a male relative—usually a father, husband or brother—for women to study, work or travel. The woman denied that she had uploaded the clips and that the Snapchat account was hers, the spokesman said.

The case has now been referred to the public prosecutor’s office, which will decide whether to prosecute the woman.

The local government of Riyadh had issued a memo saying authorities were searching for the woman who had been “walking around… in indecent clothing.”

The snaps have sparked heated debate, with social media users in the region and beyond weighing in on questions of gender and rights in the kingdom, where women are required to wear long black abaya robes and cover their hair in public. Many have come to the defense of the young woman, pointing out the privileges afforded to Western women by Saudi authorities. U.S. First Lady Melania Trump and Ivanka Trump, daughter of the president, did not cover their hair when they visited Saudi Arabia in May.

“If it were Trump’s daughter, we would have braced ourselves for the flood of compliments and love poems,” read one tweet. “Problem solved,” tweeted Shahd bint Fahd alongside a picture of the model with Ivanka Trump’s face superimposed over the original.

Others expressed outrage and derided those speaking out in support of the model. “These are the demands of the liberal ignorant community: a naked woman, a co-ed movie theater, and music and dance. That’s progress to them! Not health care and not education,” read one tweet.