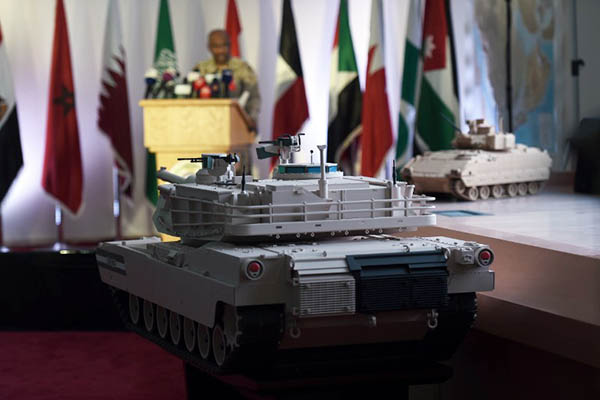 The lights fade and rapid-fire images flash across a large screen to the sounds of war: marching men, the flaming afterburner of a fighter jet, radio traffic and adrenaline-pumping music. Cue multilingual Brigadier General Ahmed Assiri and his nightly media briefing on Operation Decisive Storm, the Saudi-led coalition that began airstrikes against Shia militia in neighboring Yemen on March 26.

In a highly conservative Islamic kingdom, where cinemas and alcohol are banned, women are not allowed to drive and they must dress from head to toe in black, this is an unusual display of public relations. It coincides with a more forceful Saudi foreign policy under King Salman, who ascended the throne in January.

“They clearly have learned their lessons from the Americans, there can be no doubt,” one Western diplomatic source said of Riyadh’s media strategy and operations in the field. In the Vietnam War, skeptical journalists dubbed daily press conferences in Saigon the “Five O’Clock Follies.” Such briefings have always been as much about presenting an image as the facts themselves.

U.S. General Norman Schwarzkopf pioneered the modern version—in Riyadh—using video and a charismatic presenter during the 1990-91 Gulf War, otherwise known as Operation Desert Storm, when American troops were based in the kingdom.

Assiri and the coalition are following in that tradition, and have the help of a Dubai-based public relations firm. The daily briefings are delivered just after 7:00 p.m. at the Riyadh Air Base in a red-seated theater chilled by air conditioning, far from the stench of death and terror of gunfire on Yemen’s streets.

After the short video clip to set the mood, Assiri speaks from a lectern, standing in front of 11 flags representing the members of the coalition. Western diplomats say Saudi Arabia has carried out the majority of airstrikes against the Houthis itself, however.

Dressed in desert fatigues and with his closely shaven head uncovered, Assiri gives a general outline of the latest situation on the ground before showing black-and-white video images of airstrikes. Then it’s time for questions.

Assiri, who looks to be aged around 40, responds confidently in Arabic, English or French, making sure he gets his point across. “All we are trying to do is to make sure there is security in Yemen,” he tells reporters, adding that the purpose of his briefings is to show “what we have achieved on the ground.”

Little is known about Assiri, except that he spent at least four years at the Saint-Cyr military college in France. “They know that in these kinds of situations the communication is extremely important so they are doing it, I would say, in a professional way,” another diplomatic source said.

Like the military forces of other nations, the Saudis have also, so far, tightly restricted the access of journalists to the battlefield itself. The closest most of the reporters have got is the oversized models of fighter jets, an attack helicopter and armored vehicles arrayed in front of Assiri as he speaks in the theater.

“Thank you very much indeed,” he says before another burst of rousing music and military images closes the curtain on that day’s briefing.