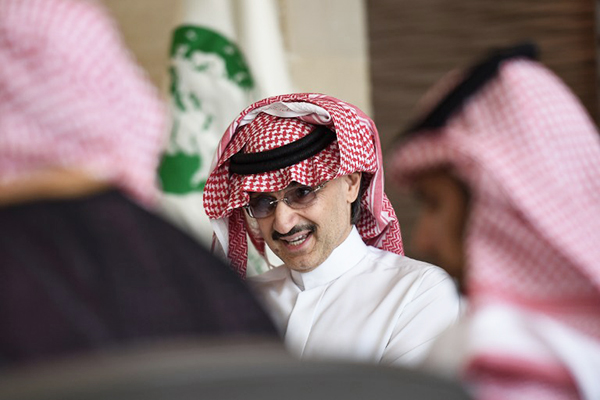 Prince Alwaleed’s worth is estimated at $32 billion.

Saudi Prince Alwaleed bin Talal said Wednesday that he would leave his fortune to charitable projects in the coming years.

The size of his personal fortune, some $32 billion, dwarfs that of most other generous billionaires who have made similar pledges in the past.

Melinda and Bill Gates: In 2000, the richest couple in the world at the time set up the Gates Foundation to raise billions of dollars to fight disease and fund education around the world. It was based in Seattle, Washington, and donated almost $4 billion in 2014.

Forbes magazine estimates Gates’ fortune at  $72.9 billion and that of Buffet at $72.7 billion. In 2012, Buffet made a separate donation of $1.5 billion to the Gates Foundation.

Patrice Motsepe: The South African billionaire was the first African to respond to the Giving Pledge. His fortune, based in large part on the mining sector, is currently estimated by Forbes at $1.64 billion. Motsepe aims to help the poor, disabled and unemployed in South Africa. In 2014, he donated a billion dollars to fight the Ebola epidemic.

Vladimir Potanin: The Russian entrepreneur, with an estimated fortune of $14.5 billion at the time, signed up in 2013.

Viktor Pinchuk: The Ukrainian industrialist, whose fortune was then estimated at $3.7 billion, signed on as well.

Tim Cook: The head of Apple said this year that his entire fortune will go to charity after his death. It is currently estimated at around $120 million, plus stock options that have a current value of around $665 million.

Liliane Bettencourt: The French head of L’Oreal cosmetics, and her husband created the Bettencourt Scheuller Foundation in 1987. Scheuller was the name of her father, who founded L’Oreal. Among the charities funded by the foundation is the Solthis organisation that fights AIDS. Forbes puts her current worth at $40.9 billion.