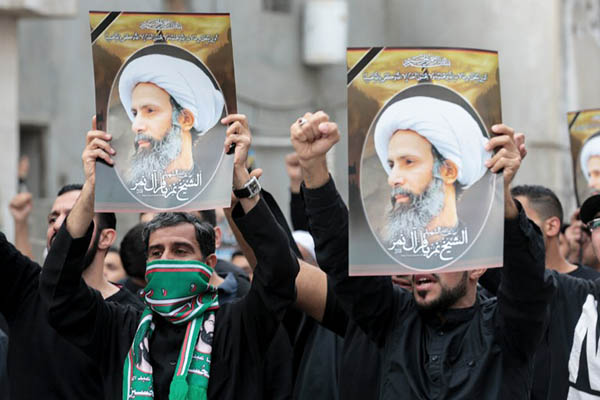 The demonstration capped a week of unrest in Nimr’s hometown of Awamiya and uncertainty in the surrounding Shia-dominated region of Qatif, after Nimr’s execution on Saturday.

“Death to the Saud family,” protesters shouted, raising their arms in the air, according to the witness. “Fall, fall, Al-Saud,” they added.

Pictures of the protest showed what appeared to be hundreds of people, many of them clad in black. They held black flags and pictures of the executed sheikh, who was also honored at a protest in Qatif on Friday night.

Nimr was a driving force behind protests that began in 2011 among the kingdom’s minority Shia community. Those protests developed into a call for equality in the Sunni-dominated kingdom, where Shias complain of marginalization.

Nimr and three other Shias were among 47 people convicted of terrorism and executed, provoking anger among Shias and concern in Western nations.

Saudi Arabia and some of its allies cut diplomatic ties with Iran in reaction, triggering a diplomatic crisis and raising sectarian tensions in the region.

Around 1,000 demonstrators marched through Tehran on Friday, chanting “death to Al-Saud,” while in Pakistan’s Islamabad 1,500 people rallied against Nimr’s execution.

Eastern Saudi residents said there had been protests this week in Awamiya, a Gulf coast town of about 30,000, which has been the scene of repeated incidents since 2011.

Shias called Nimr a peaceful activist, and an Awamiya resident said his death could lead to more aggression on the streets. “The situation completely changed,” he told AFP after seeing protesters blockade a street with a truck on Wednesday night.

Demonstrators also burned tires and garbage in the streets, while gunfire and explosions occurred regularly during the week, another resident of the Eastern region said of Awamiya. “Last night was quiet compared with the beginning of the week,” he told AFP Friday. He said “activist boys” in groups of about five were behind the street unrest, which is opposed by the broader community.

A brother of Nimr also rejected the street blockades, for fear of violence. “We don’t need even one drop of blood,” Jaffar al-Nimr told AFP. But he added: “In Qatif, most of the people are angry.”

The Nimr family received thousands of people who expressed their condolences over a three-day period this week, Jaffar al-Nimr said.

Early Friday, a man told police he was kidnapped at gunpoint in the Awamiya area, beaten and photographed, the official Saudi Press Agency said. “His vehicle was shot at after he was released,” it said, calling the incident a “terrorist” crime.

Last Sunday night in Awamiya gunmen killed a civilian and wounded a child when they opened fire on Saudi police, SPA reported earlier.

Police on Tuesday said armed “troublemakers” torched a bus in Qatif but there were no injuries. “Everyone’s now really afraid,” a third resident told AFP, adding that activists who normally comment online are remaining silent. “People don’t know what will happen.”

Since late 2014, Saudi Shias have been targeted by suicide bombings and shootings claimed by Sunni extremists of the Islamic State group, who consider them heretics. About 40 Shias have been killed.

Diplomats said the mass execution sent a clear message that the kingdom will not tolerate extremism. Nimr and three others were the only Shias among the 47 put to death, who included Sunnis convicted of involvement in Al Qaeda attacks that killed Saudis and foreigners in the kingdom about 12 years ago.