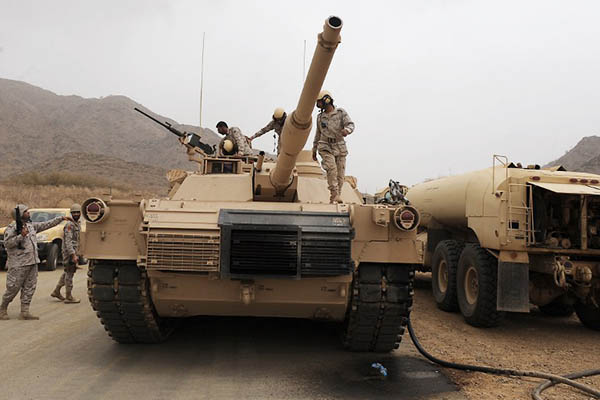 Missile strike from Yemen comes days after four soldiers died after Scud missile was fired on their position.

A cross-border missile strike from Yemen on Monday killed two more Saudi soldiers, the Riyadh-led coalition said, days after four died in battle and a Scud missile was fired.

The attack in the Asir border region happened at 8:40 a.m., the coalition said in a statement carried by the official Saudi Press Agency. A National Guard soldier and another from the Border Guard force were killed, it said.

Two other border guards died in a missile strike on the same area in late May.

At least 37 people, most of them armed forces members but also civilians, have been killed in border skirmishes and shelling since March 26 when a Saudi-led coalition began bombing rebels in Yemen. Four soldiers were slain along with “dozens” of Yemenis on Friday when forces loyal to Yemen’s former president attacked the Saudi border districts of Jazan and Najran, the coalition announced earlier.

After that hours-long battle, the coalition said it shot down with a Patriot missile the Scud fired by rebels in Yemen.

Some troops loyal to Yemen’s ousted president Ali Abdullah Saleh have been fighting in Yemen alongside Iran-backed Shia Houthi rebels. They are battling against forces of exiled President Abedrabbo Mansour Hadi.

The Arab-dominated coalition began its airstrikes in an attempt to halt the rebels’ southern advance. It made targeting rebel missile capabilities a priority, and in late April Saudi Arabia’s defense ministry said it had managed to “successfully remove threats to Saudi Arabia’s security and that of neighboring countries” by destroying heavy weaponry and ballistic missiles seized by the rebels.

The weekend Scud strike was the first reported incident involving a heavier missile.