Saudi Teen Refugee Wants to Fight for Other Women 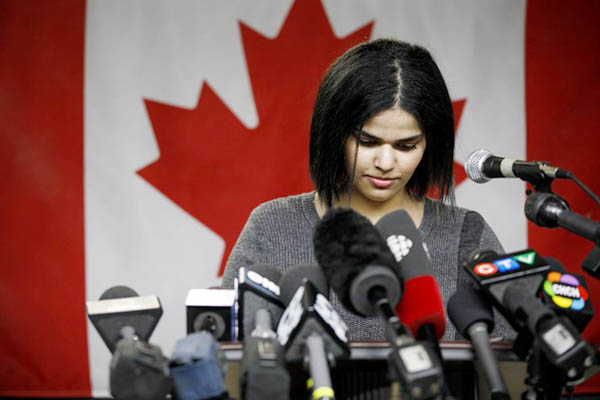 Rahaf Mohammed al-Qunun, now in Canada, says she wants to ‘work in support of freedom for women around the world’

A Saudi teen who caused an international sensation by defying her family and seeking asylum abroad on Tuesday vowed to fight for women’s freedoms in her first public address since she was taken in by Canada.

Rahaf Mohammed al-Qunun captured the world’s attention with a trail of tweets from her hotel room at Bangkok’s airport, where she holed up after Thai authorities initially barred her from traveling on to Australia. Her emotional social media posts ignited a #SaveRahaf movement as she fled what she said was physical and psychological abuse from her family in ultra-conservative Saudi Arabia—and prompted quick action.

She was granted refugee status and was welcomed by Canada’s Foreign Minister Chrystia Freeland after landing in Toronto on Saturday. “Today and for years to come, I will work in support of freedom for women around the world, the same freedom that I experienced on the first day I arrived in Canada,” she told a press conference, reading from a prepared statement in Arabic.

Standing in front of a large Canadian flag at the Toronto offices of refugee resettling agency Costi, Qunun denounced Saudi Arabia’s strict male guardianship rules, saying: “I am one of the lucky ones.”

“I know there are unlucky women that disappeared after escaping and could not do anything to change their reality,” she said through a translator. Her family has denied the abuse allegations.

Reflecting on her own experience, she said: “I was not treated respectfully by my family and not allowed to be myself and who I want to be. In Saudi Arabia, this is the case for all Saudi women except for those that have understanding parents. They can’t be independent and need approval of their male guardian for everything.”

Rights groups have said she has renounced Islam, risking prosecution in her home country. Upon learning of Canada’s asylum offer, Qunun said her stress “melted away.” Now, she said, she can make her “own decisions,” including about travel and marriage. “I would like to start living a normal life, like any young woman living in Canada,” she said.

Shortly after her arrival in Toronto, Qunun went shopping for some warm clothes and connected with local acquaintances.

Costi executive director Mario Calla said the agency is helping her find long-term accommodations, open a bank account, obtain Canadian documents, and enroll in English classes, as well as showing her how to get around and teaching her “about life in Canada.”

He noted concerns about her safety, citing online threats and saying guards have been posted at her temporary home. “She feels safe because she knows she is in a safe country. The people [here] have her best interest at heart and are trying to help her. She has seen the outpouring of support,” Calla said. Qunun has admitted that threats posted on social media “scare her,” he added. When she reads those posts, “her emotions go back and forth.”

On Monday, Qunun told public broadcaster CBC of her family: “My greatest fear is if they find me, I would disappear and I wouldn’t know what would happen to me after that.” She said that at home, she was “exposed to physical violence, persecution, oppression, threats to be killed. I was locked in for six months. I felt that I could not achieve my dreams that I wanted as long as I was still living in Saudi Arabia,” she said.

But in Canada, Qunun said, she has felt “reborn, especially when I felt the love and the welcome. She added, “Tell Canadians that I love them.”