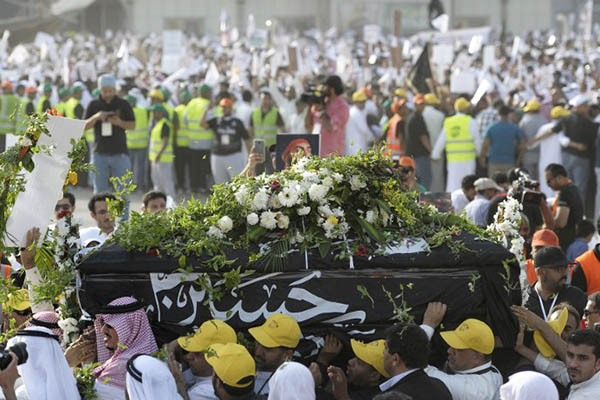 Shia community readying for more assaults after Islamic State warning it would drive them out of region.

Prompted by fears of another deadly suicide attack, cranes lowered concrete barricades on Wednesday outside a Shia mosque in Saudi Arabia still reeling from a bombing claimed by the Islamic State group.

The minority Shia community buried four men—hailed as heroes—who were blown to pieces on Friday when they prevented the bomber from entering the hall of Al-Anoud mosque in the Gulf city of Dammam. The funeral, at which some mourners carried placards denouncing hatred and terrorism, came more than a week after tens of thousands turned out to pay their respects to 21 victims of a separate mosque bombing in the Sunni-majority kingdom.

While thousands gathered to mourn the latest victims, the interior ministry released a list of 16 men suspected of involvement in the suicide blasts. It promised rewards of up to five million riyals for help in catching them. The ministry said the Al-Anoud bomber was a Saudi, Khaled Ayed al-Shammari, 19.

Mohammed al-Arbash, his brother Abdul Jalil, Mohammed Eisa and Abdul Hadi al-Hashim died when the bomber, dressed as a woman, blew himself up at a rear entrance to Al-Anoud in Dammam, which has a mixed population of Sunnis and Shias.

“We are anxious something will happen in future but we are taking care,” volunteer Ibrahim Abu Ahmed told reporters inside the worship hall, which appeared untouched by Friday’s attack. Several square meters of the rear parking lot are scorched black after the blast, which Ahmed said blew the chest of one victim about 100 meters.

Residents said three of the dead were volunteers trying to protect the mosque after a similar attack a week earlier in the nearby community of Kudeih. The fourth man killed was another civilian who was at the site when the blast struck.

“We have four heroes,” said a 21-year-old student frisking worshippers arriving for midday prayers at Al-Anoud. He stood just outside the main door to the cavernous, red-carpeted mosque with a stained-glass dome.

Several meters in front of the steps, red plastic barriers have been installed and another volunteer also searched worshippers. Beyond that are the new, heavier concrete barriers.

“This is a house of God. We should protect it,” said the student, who declined to be named. “Now all Shias [form] one line to protect ourselves from terrorism.”

The mosque blasts were the first attacks in Saudi Arabia to be claimed by I.S., which controls swathes of neighboring Iraq and Syria, and has carried out widespread abuses. Saudi authorities spoke of an attempt to provoke sectarian strife, after gunmen allegedly linked to I.S. killed seven Shias in the Eastern Province town of Al-Dalwa in November.

“We strongly expect that there will be other attacks,” said Radi Turaiki, 45, a teacher in Al-Dalwa who was preparing to attend Wednesday’s funeral in Saihat municipality, next to Dammam. AFP observed a police car patrolling outside Al-Anoud Wednesday, and others at the funeral ceremony in Saihat.

But it was volunteers who frisked mourners and searched their bags—at four different places on the road to the site. “We are under threat, very serious threat,” said Hussein al-Nemr, an organizer of the funeral. He said authorities had not done a good enough job in protecting people.

Each of the attacks has been condemned by Saudi leaders and dismissed as contrary to the values of Islam. Organizers of Wednesday’s funeral said that, after the bombing, authorities approved the first cemetery for Dammam’s Shias, part of efforts to reach out to the minority group, most of whom live in the oil-rich east but have long complained of marginalization.

For Mohammed al-Arbash, who lost two cousins in the latest attack, the Sunni majority is not to blame. “Sunni people are our brothers,” he said by telephone. “This man who exploded himself is not Sunni. He is ISIS, and ISIS has no religion,” he said.