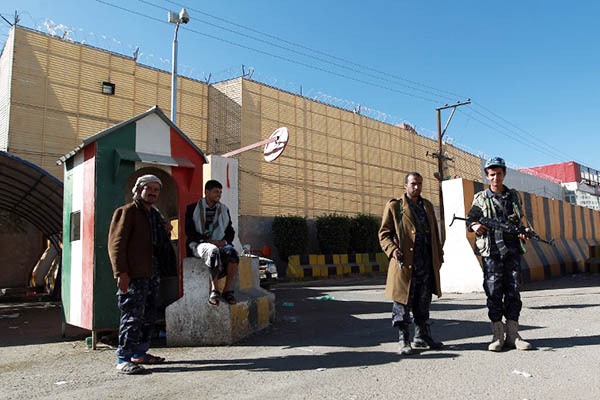 Saudi Arabia, Germany and Italy became the latest countries to withdraw embassy staff from Yemen on Friday as an exodus of foreign diplomats gathered pace over growing security problems.

Long on the front line of the war against Al Qaeda, Yemen has descended into chaos since Shia militiamen, known as Houthis, seized Sanaa in September and ousted the government last week.

Riyadh, Berlin and Rome said they had temporarily closed their missions in the capital Sanaa. “Due to the deteriorating security and political situation in the Yemeni capital, Saudi Arabia has suspended all embassy operations in Sanaa and evacuated all its staff,” the Saudi foreign ministry said.

The United States, Britain and France have rushed to close their embassies over security fears, with U.S. staff destroying top-secret documents and sensitive equipment before pulling out Wednesday. The Netherlands followed suit the next day.

The Houthis said Western powers had no reason to shut their embassies, insisting that security was solid in the capital. “The situation is anything but stable,” said a German foreign ministry spokeswoman, calling the ouster of the government by the Shia militiamen “unacceptable, dangerous and with consequences for the region.”

“We decided yesterday to temporarily close the embassy in Sanaa and the personnel departed the country early this morning,” she said.

The latest embassy closures came a day after remarks by U.N. Secretary General Ban Ki-moon, who warned Yemen was falling apart. “Let me be clear: Yemen is collapsing before our eyes. We cannot stand by and watch,” Ban told the U.N. Security Council in New York.

The instability in Yemen has been seized upon by Al Qaeda in the Arabian Peninsula (AQAP), which is expanding its foothold across the country. AQAP fighters overran an army camp in southern Shabwa province on Thursday, that left 12 troops and 15 militants dead, military officials said, revising an earlier toll of seven killed. The militants also seized a large quantity of armor and heavy weaponry, including dozens of tanks and army vehicles as well as artillery pieces, an military official said. They later handed back control of the camp following tribal mediation but kept the weapons, local government officials said.

Meanwhile, clashes erupted across several neighborhoods in Baida which the militia entered on Tuesday, between the Houthis on one side and tribesmen and Al Qaeda suspects on the other, leaving at least four people dead, local government sources said. The Houthis stormed houses in the city and detained residents they accuse of having links to Al Qaeda, the sources said.

Since seizing Sanaa, the Houthis have pressed into central and southern provinces and clashed regularly with AQAP and local Sunni tribes. Last week, they dissolved parliament and declared a “presidential council” after Western-backed leader Abedrabbo Mansour Hadi resigned over what he said was an ungovernable situation.

At the weekend, Ban called for Hadi to be fully restored as president, following talks with King Salman in Saudi Arabia which has described the Houthi power grab as a coup.

Following closed-door consultations in New York, Britain said it would work with Jordan on a resolution to outline the Security Council’s stance on Yemen.