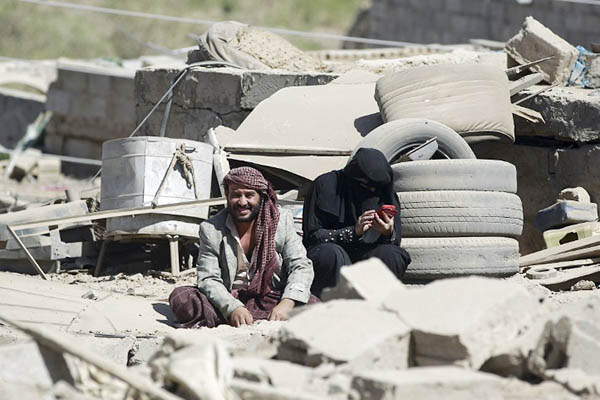 The Saudi-led coalition bombing rebels in Yemen has been using U.S.-supplied cluster munitions in its air campaign, Human Rights Watch said Sunday, warning of the long-term dangers to civilians.

The widely banned bombs contain dozens of sub-munitions, which sometimes do not explode, becoming de facto landmines that can kill or maim long after they were dropped.

Washington defended its transfers of cluster munitions, saying they were subjected to stringent requirements. “Recipients of such transfers must commit that cluster munitions will only be used against clearly defined military targets and will not be used where civilians are known to be present or in areas normally inhabited by civilians,” said a U.S. Defense Department official. “This is obviously a critical element of the policy.”

HRW said it had gathered photographs, video and other evidence indicating that cluster munitions had been used in coalition airstrikes against the Houthi rebel stronghold of Saada province in Yemen’s northern mountains in recent weeks. It said that analysis of satellite imagery suggested that the weapons had landed on a cultivated plateau, within 600 meters of populated areas.

Cluster munitions are prohibited by a 2008 treaty adopted by 116 countries, but not by Saudi Arabia and its coalition partners or the United States.

“Saudi-led cluster munition airstrikes have been hitting areas near villages, putting local people in danger,” said HRW arms director Steve Goose. “Saudi Arabia and other coalition members—and the supplier, the U.S.—are flouting the global standard that rejects cluster munitions because of their long-term threat to civilians.”

Early in the air campaign that it launched on March 26, Saudi Arabia denied it was using cluster munitions. “We are not using cluster bombs at all,” spokesman Brigadier General Ahmed al-Assiri told a Riyadh news conference.

HRW said that the munitions used in Yemen appeared to be the CBU-105 Sensor Fuzed Weapons manufactured by the Textron Systems Corporation and supplied to both Saudi Arabia and the United Arab Emirates by the United States in recent years. The weapon is banned by the Convention on Cluster Munitions but Washington permits its use and export because it boasts an unexploded ordnance rate of less than one percent.

HRW called for that loophole to be closed and for deliveries of the weapons to cease.

The US official declined to confirm the exact type of munitions used, but said Washington was “looking carefully” into the HRW report’s claims. “We take all accounts of civilian deaths due to the ongoing hostilities in Yemen very seriously,” the official said. “We call upon all sides to comply with international humanitarian law and to take all feasible measures to minimize harm to civilians.”

There was has been mounting criticism of the civilian toll from the coalition air campaign now in its sixth week. On April 14, U.N. human rights chief Zeid Ra’ad Al Hussein said recent strikes had hit residential areas and homes across five provinces. “All such attacks need to be thoroughly and transparently investigated by the coalition forces,” he said. “Such a heavy civilian death toll ought to be a clear indication to all parties to this conflict that there may be serious problems in the conduct of hostilities.”

But having invested huge political capital in the campaign against the Iran-backed rebels, Saudi Arabia has vowed that it will go on until exiled President Abedrabbo Mansour Hadi is restored. The rebels and their allies in the armed forces have captured large parts of the country since overrunning the capital Sanaa in September.