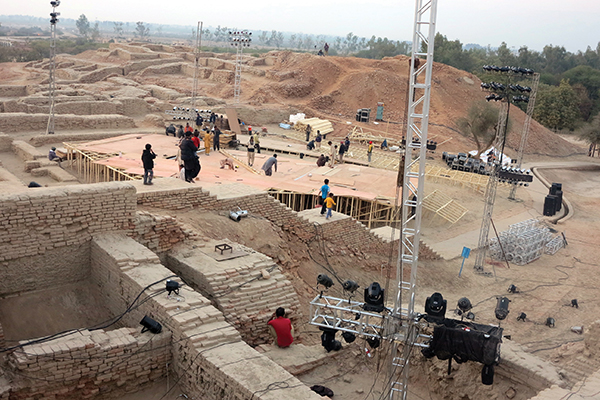 Journalist Amar Guriro almost ruined the party. Days ahead of the Sindh Festival’s opening ceremony at Moenjodaro on Feb. 1, he tweeted pictures of the preparations underway. These images, appearing to show ruinous disregard for the ancient UNESCO World Heritage site, sparked a firestorm. The misplaced defense from some hacks ran from the amusingly bizarre (“No one gave a damn about Indus Valley and Moenjodaro. It is not the ruins but the fact that [Bilawal Bhutto Zardari] is leading a cultural campaign”) to the outright idiotic (“For a country that now loves ancient monuments, how many protests were held in Pakistan when the [Bamiyan] Buddhas [in Afghanistan] were destroyed?”). It took Bhutto Zardari, founder of the festival, to coolly make things right. “We are grateful for the concern voiced by Pakistanis” about Moenjodaro, he said. “We share this concern deeply, and have taken extraordinary and foolproof measures to protect this heritage site from any possible harm or damage.” True to his word, Bhutto Zardari rolled out reputable experts, site visits, an information blitz, and made modifications to the work to avert a major PR, and conservationism, disaster.